It’s that time again. Tomorrow, Apple will hold its usual quarterly earnings call. This one will revolve around the Cupertino-based company’s revenue and sales over the course of the first quarter of 2012, expected to be a $37 billion dollar quarter.

In advance of this, Philip Elmer-Dewitt has put together his list of analysts’ expectations for the numbers they expect to hear on that conference call. He has split them by independent analysts and analysts associated with a financial institution.

The independent group is averaging their revenue number at $43.14B while the institutional analysts are working with a figure of $39.23B on average.

Both those estimates are over-and-above the expected revenue amount for the quarter back in October of $37 billion. 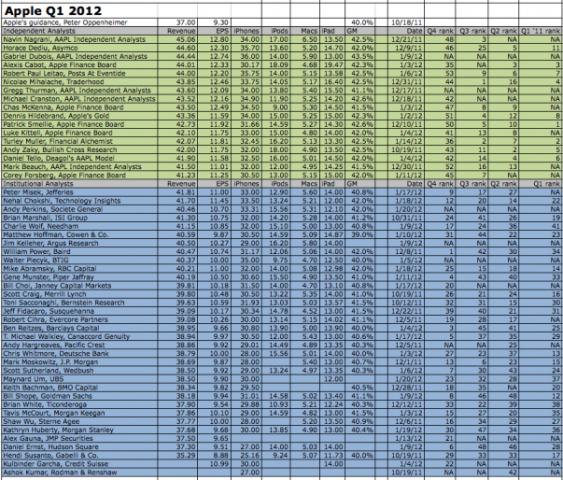 For the full-sized report, check out Elmer-DeWitt’s post on CNN Money.

The spreadsheet also points out sales projections for numbers of iPhones, iPads, iPods and Macs sold over the holiday quarter. It should be interesting to see how these guesses stack up against tomorrow’s real announcement. Apple is expected to have a monstrous quarter for iPhone sales.

How accurate do you think these numbers are?