Analysts Remain Bullish on AAPL Ahead of ‘iPhone 8’ Release

Apple revealed how it performed during the second fiscal quarter of 2017 earlier this week, posting a $52.9 billion revenue and a net profit of $14 billion. Although the numbers slightly missed the mark according to some financial analysts, the majority of analysts seem to remain bullish on Apple’s stock price (AAPL) heading into the second half 2017, as seen in the latest data obtained by MacRumors from over a dozen sources. 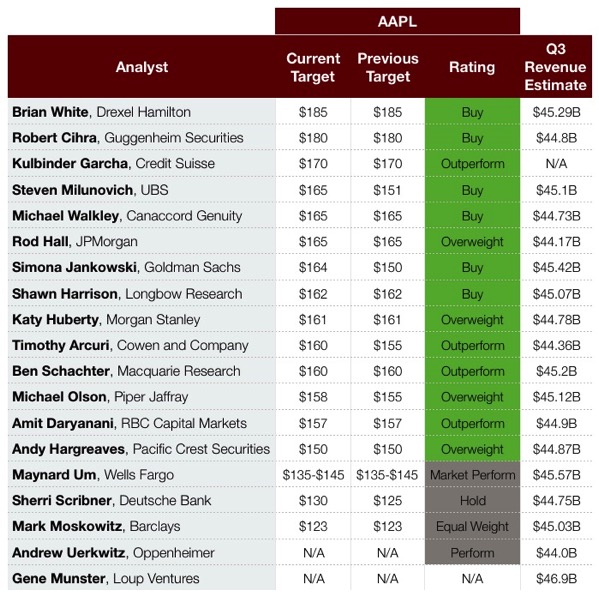 The chart (shown above) shows some leading analysts’ updated AAPL price estimates and guidance for the iPhone maker’s third financial quarter. As you can see, majority of analysts have rated Apple’s stock as Buy to Outperform. Katy Huberty of Morgan Stanley, who anticipates an iPhone Supercycle based on high expectations for the ‘iPhone 8’, says the next iPhone’s exciting new features “will drive an iPhone supercycle that is still underappreciated by the market”.

At the same time, Rod Hall of JPMorgan believes the ‘iPhone 8’ will be previewed at WWDC next month, marking the start of “iPhone mania” in June rather than in September:

“We believe there is a high likelihood that the company plans to announce or at least preview the upcoming new iPhone at WWDC which starts on June 5. Given this we would expect a weaker than normal Summer for Apple as consumers await a major product upgrade. […] Given that our numbers remain well above consensus forecasts we would advise investors to continue to stock up on AAPL before iPhone mania kicks off in earnest in early June”.