Mobile malware infections were up 25% in 2014, according to the latest Alcatel-Lucent Motive Security Labs report (via ZDNet). The security research arm of the French telecom company estimates that 16 million mobile devices worldwide were infected with malware.

Considering the number of smartphones used worldwide, Alcatel-Lucent puts the infection rate at 0.68%. What’s alarming, though, is that mobile spyware is on the rise: 6 of the top 20 cases of mobile malware on the list are spyware, malicious software used to spy on the phone’s owner. Spyware tracks the phone’s location; monitors incoming calls, outgoing calls, text messages, and email; and tracks the victim’s web browsing. 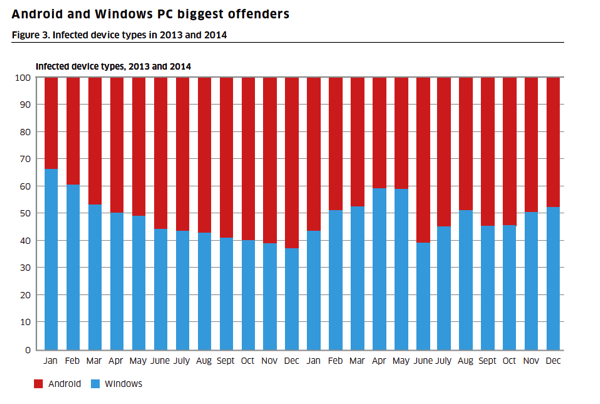 While iOS and BlackBerry users can relax — according to the report — as they accounted for less than 1% of the 16 million infected devices, Android and Windows/PC users can start scratching their heads: the infections are split 50/50 between them.

Windows remains the workhorse of cybercrime, but the Android platform is catching up, the report highlights.

The Motive Security Labs report also stresses that distributed denial of service (DDOS) attacks are on the rise and points to the first DDOS attacks launched from mobile devices, suggesting that “hacktivism’”movements against the mobile infrastructure might be launched in the future.