The end of the first calendar quarter of 2017 also marks the end of an era: Android has overtaken Microsoft as the most popular operating system in terms of total internet usage across desktop, laptop, tablet and mobile combined, Global StatCounter has announced.

According to the latest data shared by StatCounter, Android’s worldwide OS internet usage market share reached 37.93%, surpassing that of Windows, by 0.02%, for the first time. That’s a huge leap ahead, considering that Windows has been dominating the worldwide OS market since the 1980s, StatCounter CEO Aodhan Cullen said.

“It also represents a major breakthrough for Android, which held just 2.4% of global internet usage share only five years ago.”

Cullen points to the rapid adoption of mobile devices as the main reason for Microsoft’s significant loss. That doesn’t mean it has lost on every fronts, however: Windows is still the most popular operating system in the desktop market, with an 84% market share, according to StatCounter.

The most popular OS in terms of internet usage in North America was Windows with a 39.5% market share. iOS followed Windows with 25.7%, and Android ranked third with 21.2%. A similar pattern is visible in Europe, but in Asia Android accounts for 52.2% compared to Windows’ 29.2%, the StatCounter data reveals. 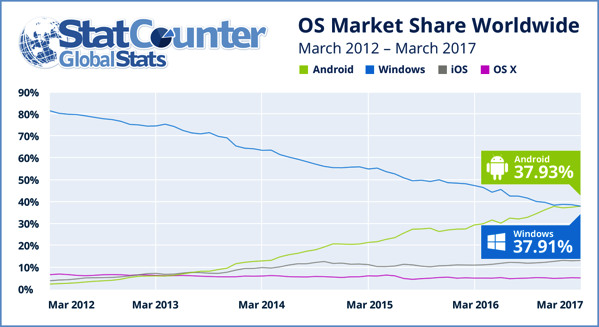