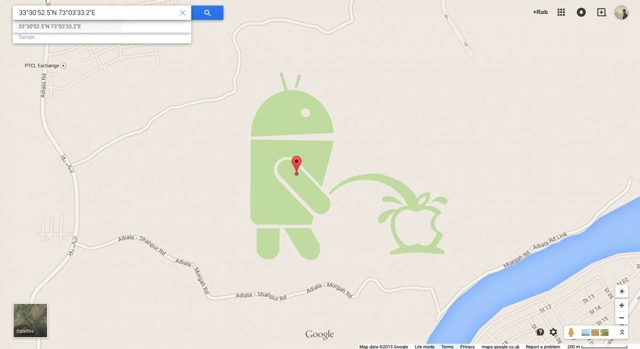 The absurd image of an Android “Droid” mascot urinating on Apple’s logo, that was spotted earlier today on Google Maps near the city of Rawalpindi in Pakistan, has just been removed by Google, along with an apology that echoes the incompetence of company’s shoddy Maps review team, “We’re sorry for this inappropriate user-created content. We’re working to remove it quickly.” According to Business Insider, Google has insisted that even though it may be a bitter rival for Apple, its employees aren’t to blame for this imagery.

“A spokeswoman for the company told me that the bizarre image was created by Map Maker: A Google app that lets users update and contribute to its Maps to improve their accuracy. These edits are supposedly reviewed by other users to ensure there’s no abuse, but this one apparently got by unnoticed.”

Even though Google’s MapMaker can be used by just about anyone to add erroneous information to Google Maps, it does not rule out the possibility that the image was indeed created by a company employee. Interestingly though, another message appeared in a nearby forest shortly after the Rawalpindi prank was spotted, that says “Google review policy is crap” (shown below). 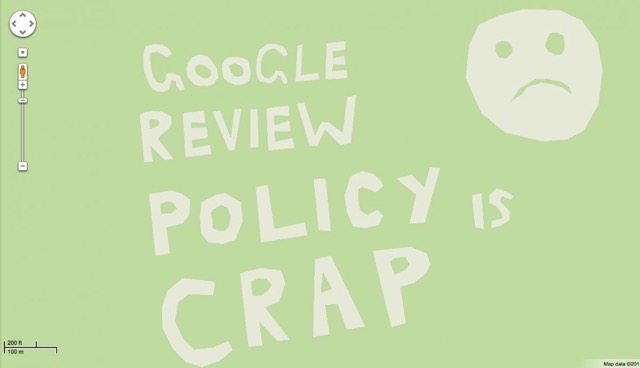 With a simple to use tool like MapMaker, anybody can navigate to Google.com/mapmaker, log in with a Google account and start drawing stupid stuff like this, which most likely will go live, without catching the eye of Google’s terrible review team.