Apple is offering a 10% bonus to Canadians adding funds to their Apple ID right now.

“Get a 10% bonus when you add funds to your Apple ID,” explains the company. The bonus appears when you go to add funds from your iPhone or iPad.

Apple says the promo is valid through to December 12, 2019 and is “available when adding $1.00 to $200 to your account.” The bonus limit is 1 says Apple and “offer eligibility may vary based on account information or purchase history”. 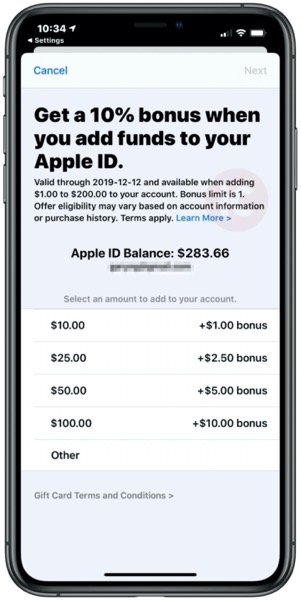 If you can’t figure out the bonus math, here it is:

How to add funds to your Apple ID? Apple makes it difficult to find. You’d think they would want to make it easier for customers to give them more money!

On your iPhone or iPad, go to:

From here, select an amount and you’ll be charged to your credit card.

Another way to save on your Apple ID balance is to load up on 20% off iTunes cards from Costco’s periodic sales. Expect another one during Black Friday or Boxing Day.

Apple launched a similar promo last December in the U.S. and Japan, then added Canada shortly after.