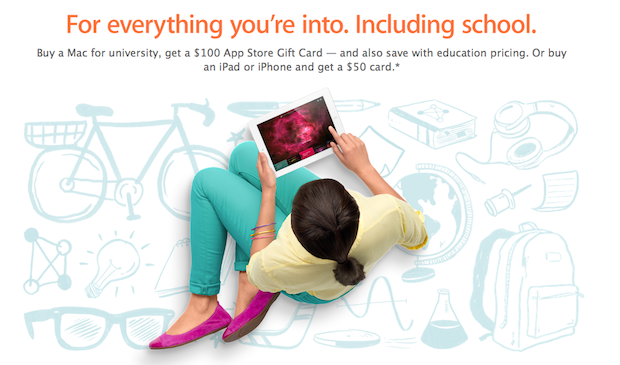 Apple might make Canada Day a bit sweeter tomorrow as its annual Back to School promo is said to kick off then, according to a source speaking to MacRumors.

No big surprises here with what we can expect in terms of the promo, which looks to be similar like last year with iTunes Gift cards for purchases of Macs and iPhone and iPads.

If this date holds true, the 2014 Back to School promo will start one day earlier than last year’s July 2 kick off date.

A couple weeks ago, 9to5Mac similarly reported the promo would start in late June or early July. If you’re set to make an Apple purchase soon, hold off just a bit longer so you can jump on this promo.

Ian Scott, chairman of the Canadian Radio-television and Telecommunications Commission (CRTC), told the House of Commons Industry and Technology (INDU) committee that he was once the victim of an e-mail spoofing scam — reports The Globe and Mail. Apparently, bad actors were able to impersonate Scott's e-mail address an undisclosed amount of time ago. The...
Nehal Malik
22 mins ago

Tesla and SpaceX CEO Elon Musk will purchase Twitter again with his original terms at $54.20 per share, as revealed yesterday in a surprise u-turn. The decision comes ahead of Musk’s scheduled deposition starting tomorrow and his October 17 Supreme Court case in Delaware with Twitter, as the Tesla leader originally wanted to renege on […]
Gary Ng
34 mins ago