Apple has launched their one-day Black Friday shopping event in Canada, and as expected from what we learned yesterday in Australia and New Zealand, deals are the same in the form of gift cards. 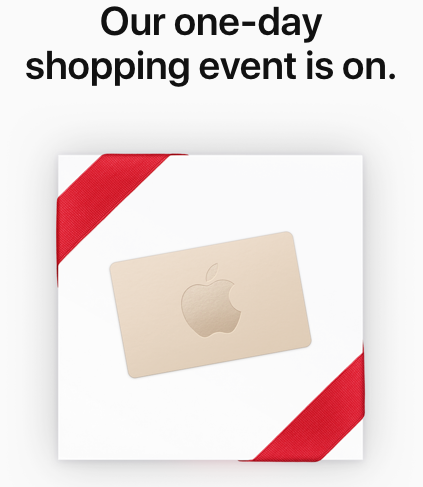 On select iPad, iPhone, Apple Watch Series 1 and Mac purchases, customers can get gift cards depending on what models they purchase. Here’s what’s available:

Last year we saw gift cards available for Apple TV purchases, but that’s not the case in 2017. Even the latest iPhone 8, iPhone 8 Plus and iPhone X aren’t eligible for gift cards, nor are Apple Watch Series 3 models.

If you were planning on buying one of these models above from the Apple Store, it may be nice to get a little bonus. But you may be better off finding discounts on Black Friday at other retailers.

The display technology experts over at DisplayMate have crowned the iPhone 14 Pro Max's screen the best to ever grace a smartphone, giving it their highest-ever A+ rating and "Best Smartphone Display Award." DisplayMate is one of the world's leading authorities on display technology. The corporation's reviews and reports are based on comprehensive, objective laboratory tests...
Nehal Malik
41 mins ago