Apple reported earnings for the quarter ended December 31, 2016 yesterday – and the numbers were huge. The iPhone-maker pulled in $78.4 billion USD in revenue for the period (compared to $75.9 billion USD last year), which set an all-time record for quarterly revenue. But, as ever, the most interesting points lie below the top line. Since the earnings report, Apple’s stock price has stock has climbed by the highest percentage in a single day ever recorded for the company.

Check out Apple’s total revenue by quarter evolve in this chart by Six Colors: 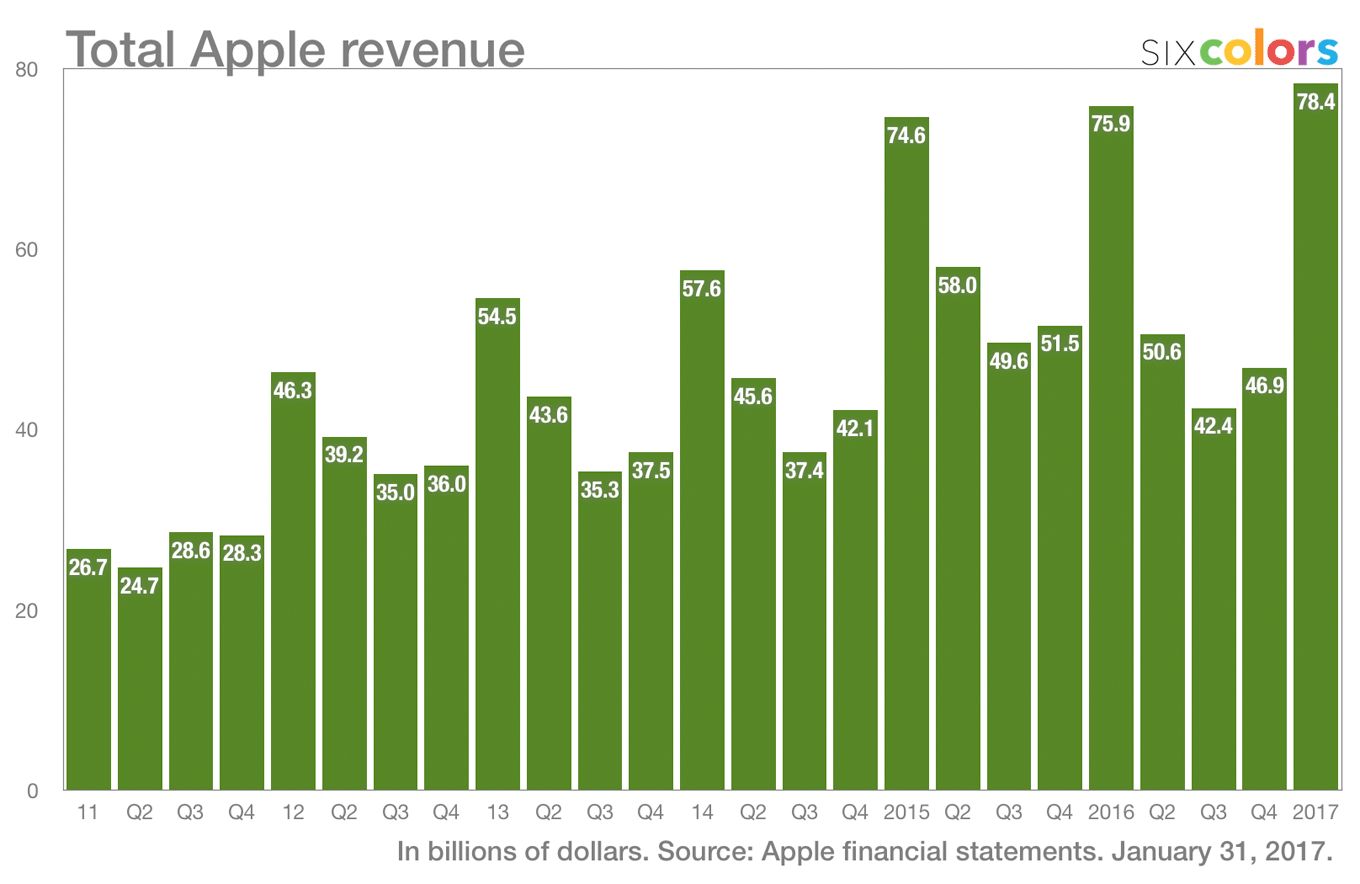 “We’re thrilled to report that our holiday quarter results generated Apple’s highest quarterly revenue ever, and broke multiple records along the way,” said Apple CEO Tim Cook. “We sold more iPhones than ever before and set all-time revenue records for iPhone, Services, Mac and Apple Watch.”

The iPhone maker’s giant size has a massive impact on indices such as the Dow and the S&P 500 because of its weight. MarketWatch estimated that the $4.74 USD gain in Apple (AAPL) stock in this morning’s premarket hours would have added about 32 points to the Dow Jones.

At the time of this writing, Apple stock is trading at about $129, up more than 5% for the trading day. The move helped the stock hit a new 52-week high. Apple stock’s move higher on Monday adds to the increasingly bullish sentiment toward the stock recently. In the past six months, shares are up about 23%, easily outperforming the S&P 500’s 5% gain during the same period.

Investor optimism toward Apple stock recently is likely due to a wide range of factors, including its conservative valuation, speculation about a major redesign for Apple’s expected iPhone launch this fall, and Samsung’s recall of its ill-fated Galaxy Note 7. But one trend in Apple’s business is likely serving as a primary driver for the company’s rising stock price: a rebound in iPhone sales.

Apple is projecting revenue for next quarter of $51.5 to $53.5 billion USD, and margins between 38 and 39 percent. Check out a full transcript of Tim Cook’s remarks regarding the company’s historic quarter over at iMore.