Apple announced this morning accelerated plans to invest in the U.S. economy, saying it will invest $350 billion over the next five years via direct employment, spending and investment with domestic suppliers and manufacturers and also fuelling the app economy.

The company’s latest press release details nearly $55 billion will be spent in 2018 in the US, while overall $350 billion over the next half decade. This doesn’t include ongoing tax payments, plus tax from employee wages and Apple product sales. 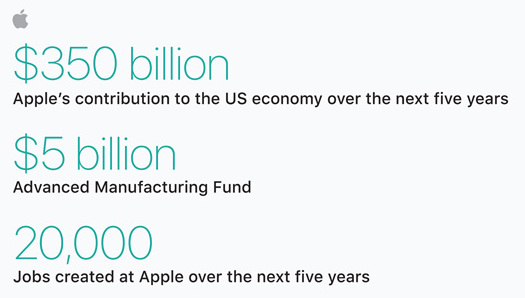 “Apple is a success story that could only have happened in America, and we are proud to build on our long history of support for the US economy,” said Tim Cook, Apple’s CEO, in an issued press release. “We believe deeply in the power of American ingenuity, and we are focusing our investments in areas where we can have a direct impact on job creation and job preparedness. We have a deep sense of responsibility to give back to our country and the people who help make our success possible.”

Apple says capital expenditures lined up in the US, along with manufacturing investments over the next five years and a “record tax payment upon repatriation of overseas profits”, will make up about $75 billion of the company’s direct contribution.

When Apple repatriates overseas cash, it will make nearly $38 billion in payments, which it says “would likely be the largest of its kind ever made.” Apple is already the largest taxpayer in the US.

Over $30 billion will be invested in capital expenditures, which will result in 20,000 new jobs hired at existing Apple campuses. A new campus is planned and will set to house technical support for customers first, and its location will be announced later this year.

Apple says over $10 billion of their planned expenditures will be for data centres in the US, while today the company is breaking ground on a new downtown Reno facility, powered by green energy, like all of the company’s US facilities, which includes offices, retail and data centres.

The company’s Advanced Manufacturing Fund announced last spring will also see its size increase from $1 billion to $5 billion. The program is aimed at supporting American companies to innovate and establish themselves in the US.

Last but not least, Apple says it plans to add new programs for teachers related to its App Development with Swift Curriculum, plus increase funding for its ConnectED program, which supports underserved communities to gain access to technology and coding in the classroom.