Apple has updated their App Store developer page to detail devices which have iOS 12 installed. 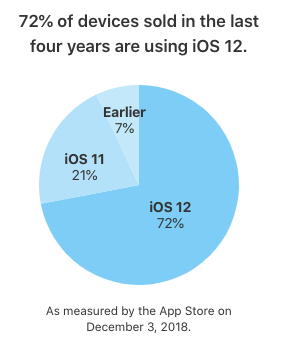 As for all devices, Apple says 70% of all devices are using iOS 12, as per App Store data.

Apple wants developers to know the iOS platform is where you can attain success, because the majority of users have access to the latest updates, unlike Android, where only the newest devices get the most recent updates.

Earlier this morning, Apple announced their ‘Best of 2018’ list, detailing the top iPhone and iPads apps, and more.