Apple: 78% of All Devices Introduced in the Last 4 Years are Using iOS 12

Apple released new installation numbers for iOS 12, as an update to its Developer page now acknowledges “78% of all devices introduced in the last 4 years are using iOS 12,” based on App Store data as of January 1, 2019. 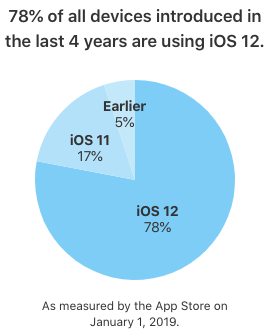 Back in November, Apple said this same adoption rate for devices was at 63%.

Apple also shows a chart saying “75% of all devices are using iOS 12.”

It’s easy to see why people are installing iOS 12, as they want to gain the performance benefits from this latest update. It’s also easy to install iOS 12, as Apple offers it the same day for all compatible devices.

Android updates, on the other hand, are reliant on wireless carriers to test the software on each device before their release (unless you’re using a Pixel smartphone from Google), resulting in serious delays.