Apple is already in the business of making the fastest mobile chips in the world, and even though it’s not easy to predict what features or performance an unannounced A-series processor will deliver, it is safe to assume the A14 SoC coming out later this year will be better than anything we’ve seen so far. 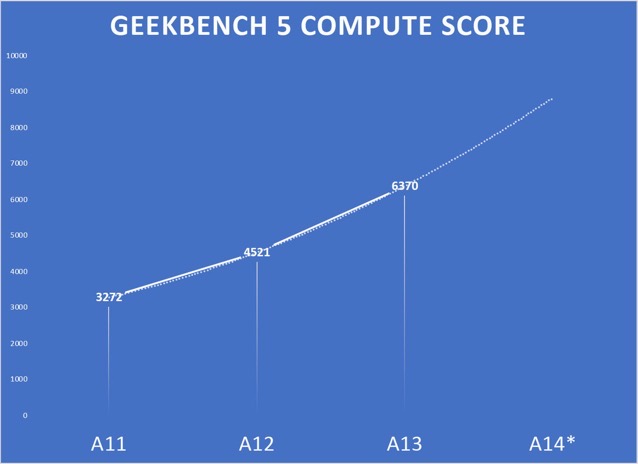 The folks over at MacWorld have put together a comprehensive article based on industry reports and recent rumours to create a list of what we can expect from Apple’s next-generation A14 processor that will most likely debut with the ‘iPhone 12’.

With the A14, Apple is expected to make the jump to TSMC’s brand-new 5nm process. TSMC says it delivers 80 percent more logic density and can run either 15 percent faster at the same power as its 7nm chips, or 30 percent lower power at the same performance level.

In terms of overall size, Apple is likely to keep the processor around the same size as the A13. As for the performance, both single-threaded and multi-threaded performances are expected to improve:

Apple already very efficiently schedules workloads to take advantage of all cores as much as possible, so it’s unlikely that we’ll see a big improvement from better scheduling. But with the big jump in transistor density from 5nm, Apple might add a third big core, or significantly boost performance of the high-efficiency cores, which would really boost multithreaded performance.

Graphics performance, image processing, and Neural Engine are all expected to see significant improvements as well in Apple’s A14 processor. For more technical details on what to expect from Apple’s A14 SoC, check out the source page.

[caption id="attachment_386647" align="aligncenter" width="2049"] Image: OpenAI[/caption] Last week, nonprofit artificial intelligence research firm OpenAI launched ChatGPT, a chatbot based on a conversational artificial intelligence (AI) model that can comprehend natural language queries, process them, and provide outputs based on the expansive dataset it has been trained on. "ChatGPT is optimized for dialogue," explains OpenAI, which...
Nehal Malik
12 mins ago