Yesterday Apple announced on their website an absolutely staggering fact: the App Store has reached 500,000,000 downloads and 15,000 applications. Just reading that makes my mind boggle.

Out of those 500 million downloads, I bet the majority of them were free apps and viral apps such as iFart or iToot, or any other farting application. This is why I love the iPhone so much.

The App Store gives us such amazing access to new programs that keeps the phone fresh and entertaining. This is what you’ll see if you browse over to Apple’s website: 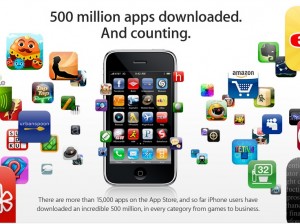 One such application that I hope Apple approves is the upcoming Ustream.tv app. The Ustream team hopes to have this app approved in time for Barack Obama’s Inauguration on January 20th. That will mean no matter where you are, you’ll be able to watch the event LIVE from your iPhone and interact with the community. So. Darn. Cool.

What new iPhone Apps are you looking for, or are excited about seeing?