Yesterday, we shared the full list of games set to debut with the launch of Apple Arcade on September 19, Apple’s highly-anticipated gaming subscription service that will cost $5.99 CAD per month in Canada, including a family subscription.

Today, a Reddit user has created an Airtable that lists all the Apple Arcade games by Name, Age Rating, Category, Size, Release Date, and Language, as well as support for local multi-player and third-party game controllers. 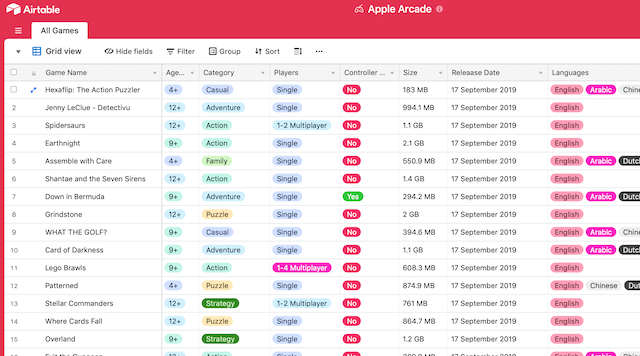 Looking at the list, it appears that only 10-12 games support game controllers at launch, although that number should grow with time. Similarly, multi-player support is currently available only on a handful of Apple Arcade Games.

Apple Arcade launches on September 19, alongside iOS 13, while iPadOS 13 and tvOS 13 will get the gaming service on September 30, and macOS Catalina later in October.