Apple has sent out an email blast to remind customers their annual Back to School promo offering a free pair of Beats wireless headphones ends in one week, on September 25, 2017. 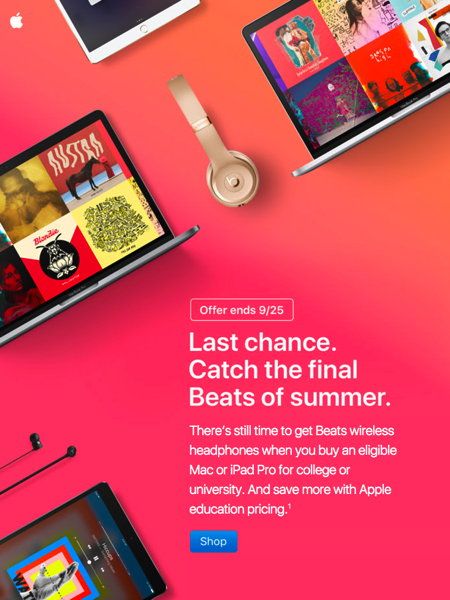 According to the email, Apple says “There’s still time to get Beats wireless headphones when you buy an eligible Mac or iPad Pro for college or university. And save more with Apple education pricing.”

Apple launched their 2017 Back to School promo in July. The following Mac and iPad Pro models are eligible towards a free pair of headphones:

Education customers can get a pair of Beats Solo3 Wireless On-Ear Headphones, Powerbeats3 Wireless Earphones, or BeatsX Earphones with promotional savings varying depending on what you purchase. Mac customers will get values of $329.95, $249.95 and $179.95 respectively towards these three models, while iPad Pro users get savings values of $179.95 only.

Apple recently launched its iPhone 14 series of devices, introducing the new 'Plus' model to the fold. The 6.7-inch device joined the standard iPhone 14 as part of the entry-level offering. However, prior to its official reveal, the iPhone 14 Plus looks to have been called the 'iPhone 14 Max.' According to Dutch blog iCreate (via...
Steve Vegvari
54 mins ago