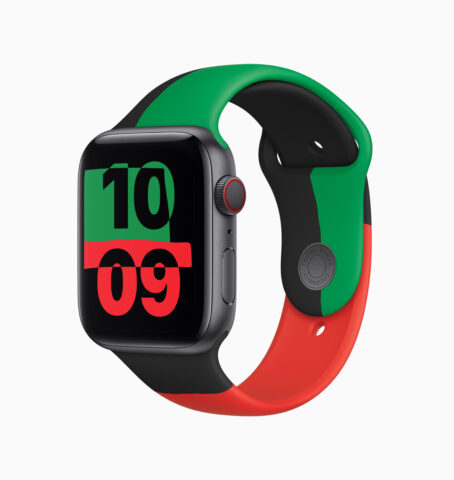 To celebrate Black History Month, Apple is bringing customers a variety of new and updated collections and exclusive content that highlight and amplify Black creators, artists, developers, and businesses.

From curated features across the App Store, Apple Music, the Apple TV app, Apple Books, and Apple Podcasts, to new Apple Maps Guides, the Apple Watch Black Unity Collection, Today at Apple sessions, and more, you can see what’s in store across Apple’s products and services this February in a new press release.

Among those is a new Apple Watch Series 6, and although Apple has released special edition versions of its Apple Watch in the past — most notably the (PRODUCT)RED model — along with limited-edition Apple Watch bands, this is the first time the company has produced a limited edition of the actual Apple Watch itself.

Dubbed “Black Unity” the new Apple Watch Series 6 is part of an entire Black Unity Collection that includes a Black Unity Sport Band, along with the Black Unity Watch Face. Although it’s only labelled as “Unity” in that version, from its visual appearance and description it’s clearly part of the collection that Apple is speaking of, although it’s not yet clear if the watch face will offer some additional enhancements when used on the actual Black Unity Apple Watch.

“The Black Unity Collection pays homage to the rich tradition and craft of quilting in the Black community and celebrates the colors of the Pan-African flag: red for the blood that unites people of the African Diaspora and was shed for their liberation, black for the people whose existence is affirmed by the flag, and green for the vibrant natural wealth of Africa, the Motherland. The Black Unity Sport Band is made from individual pieces of colored fluoroelastomer, which are assembled by hand and compression-molded into one. The Unity watch face creates an ever-changing pattern that dynamically shifts as Apple Watch moves.”

The Apple Watch 6 Black Unity will only be available during February, and it’s set to start at $399 USD, or $499 if you want cellular connectivity. Pricing for other regions hasn’t been confirmed at the time of writing, but those are the standard starting prices for the aluminum Apple Watch 6, so presumably it would cost the same as that elsewhere.