Apple has announced this evening it has joined other tech companies in launching a bug bounty program, which pays security researchers when they uncover vulnerabilities in iOS or recent generations of their hardware. 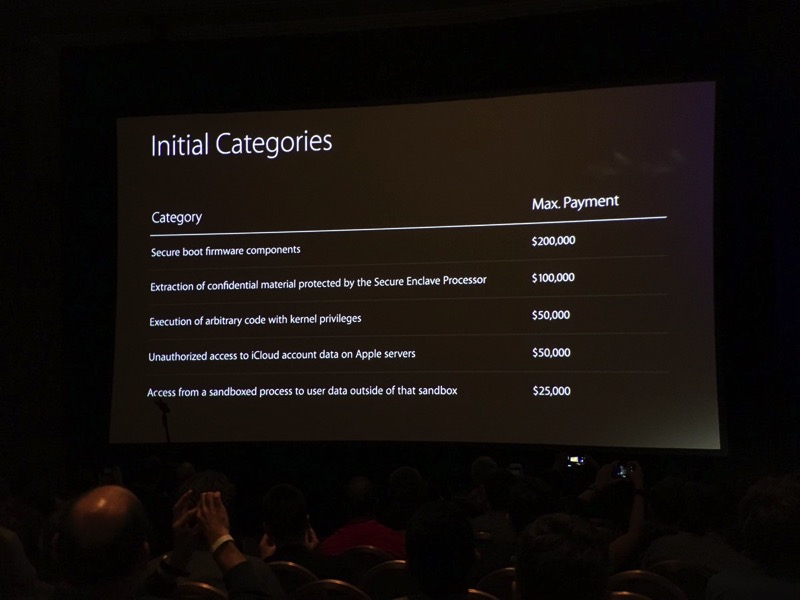 According to The Verge:

The new program will begin as invite-only, including only a few dozen researchers. Still, Apple says the program will become more open as it grows, and if a non-member approaches Apple with a significant bug, they’ll be invited into the program to work it through. The invite system is unusual for a bounty program, but Apple explained it as necessary to weed out spurious submissions and make sure trusted researchers had adequate support from the company.

So it’s an invite-only bug bounty program starting in September, but if an exploit is discovered by a non-member, they’ll get in. The program doesn’t include macOS yet.

Rich Mogull from Securosis, who is attending the Black Hat USA conference where Apple made the announcement, has listed the bug bounty payouts based on exploits:

Also, if security researchers want to donate their bounty to charity, Apple, at their discretion, may match the donation.

It’ll be interesting to see how this program works out. iOS is already very secure, but we know Apple has ongoing plans to increase security further, and the bug bounty program may just help.

Samsung and LG are gearing up to start mass production of displays for Apple's first OLED iPads, according to a report from the South Korean publication ETNews (via MacRumors). The information comes from Ross Young of Display Supply Chain Consultants, a well-known industry analyst. According to Young, both South Korean display manufacturers will produce "hybrid" panels for...
Nehal Malik
2 mins ago

Google announced an experimental conversational service based on artificial intelligence today, called Bard, confirming what was reported last week. The details of Bard look to compete against the rise of Open AI’s ChatGPT, with the latter’s inventor backed by a $10 billion investment from Microsoft. On Monday, Google CEO Sundar Pichai detailed more about its […]
Gary Ng
34 mins ago