Apple Moves Canadian Headquarters from Markham to Downtown Toronto [u]

Apple’s Canadian headquarters have long resided in Markham, Ontario, about 29 kilometres from downtown Toronto. According to unnamed sources speaking to 9to5Mac, the Cupertino company has moved to an office in downtown Toronto instead:

Apple’s Canadian HQ used to be located in a 78,000 square foot building on the outskirts of Toronto, but the company has recently moved into a smaller downtown location as it looks for a tenant to take over its previous headquarters for the country, according to sources close to the situation.

The new office location is located on 120 Bremner Boulevard in Toronto, as noted on Apple Canada’s contact page. 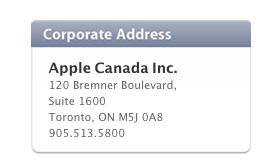 As for the Markham headquarters, they are apparently ready to be sold through DTZ Property Services, say sources. The old headquarters housed a large 36,000 square foot warehouse which acted as a shipping and return address for online orders.

If and when Apple actually does decide to depart their original Canadian headquarters, it will most likely be reflected in the company’s Canadian press releases as they have long noted Markham as the location.