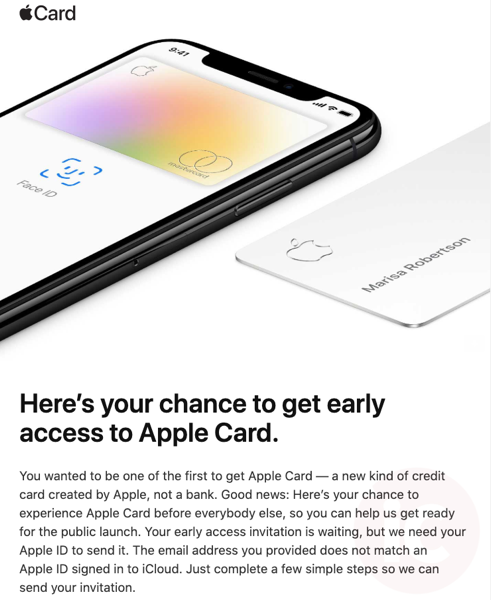 Apple Card is the credit card from Apple for iPhone users, currently only available in the United States. However, some Canadians have noted they have received email invites asking them to sign up for Apple Card.

iPhone in Canada reader Jason says he received an Apple Card invite via email, asking you to “get early access to Apple Card”.

“You wanted to be one of the first to get Apple Card — a new kind of credit card created by Apple, not a bank. Good news: Here’s your chance to experience Apple Card before everybody else, so you can help us get ready for the public launch.”

The email explains users need to enter in a valid Apple ID email used to sign into iCloud, saying, “Your early access invitation is waiting, but we need your Apple ID to send it. The email address you provided does not match an Apple ID signed in to iCloud. Just complete a few simple steps so we can send your invitation.”

Apple provides the following steps on how to get your Apple Card invitation:

How to get your invitation:

Invitations may take up to 48 hours to arrive.

Once you enter a valid Apple ID—even one based in Canada—the invite form does not reject it. It says, “Thank you. We’ll contact you soon.” This acceptance of a Canadian Apple ID may add confusion as to Apple Card’s reach. The confirmation doesn’t mention in the fine print Apple Card is only available in the U.S. 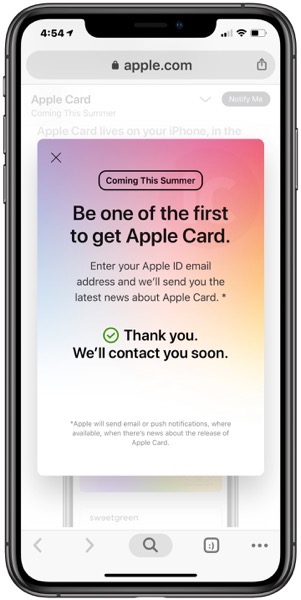 It appears this email was sent out to any user who had entered in an email address asking to be notified about Apple Card’s launch from Apple’s website.

Again, Apple Card is only available in the U.S. at launch and may expand internationally at some point, hopefully reaching Canada soon.