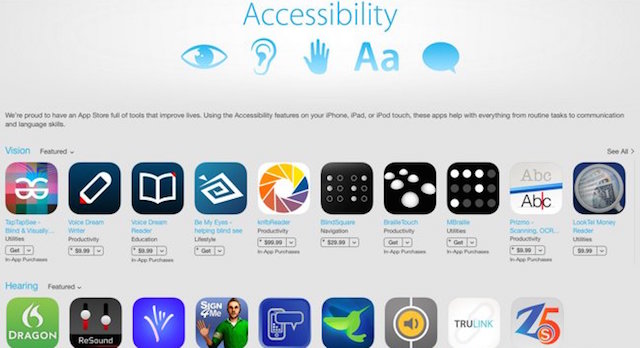 Apple is celebrating the 25th anniversary of the Americans with Disabilities Act (ADA) by highlighting a collection of accessibility apps designed to accommodate users with vision, hearing, speech, physical and motor skills or learning issues. Apple’s SVP of worldwide marketing Philip Schiller also tweeted a link to the new category of apps on iTunes, while saying “Thank you developers for creating apps that change lives”.

Similarly, Apple CEO Tim Cook also expressed his thoughts on Twitter, highlighting the importance of making technology accessible to everyone:

Accessibility rights are human rights. Celebrating 25yrs of the ADA, we’re humbled to improve lives with our products. #ADA25

Over the last few years, Apple has set the bar in innovative assistive technologies, including VoiceOver, Zoom and Mono Audio, all of which are built into the core of iOS, OS X and watchOS at no additional cost for users.

Last month, Apple was also awarded the prestigious Helen Keller Achievement Award by the American Foundation for the Blind (AFB) for breakthroughs in accessible technology, especially for the VoiceOver feature.