Following Apple’s second-quarter earnings call with financial analysts, the company CEO Tim Cook sat down with Mad Money’s Jim Cramer to talk about the company’s performance and the “bigger picture”. 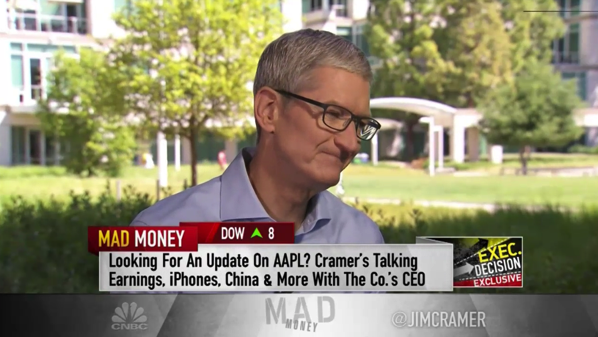 Looking back to the past quarter, Cook highlighted that Apple’s Services business (which includes Apple Pay) grew 18%, Apple Watch sales almost doubled compared to last year, and the iPhone grew in a revenue sense, because the iPhone 7 Plus sales were “just off the charts”.

He also explained his comment on how rumours influence the sales of the iPhone, as people are holding back, hoping to get the best yet of the iPhone with the new-generation device. As it turns out, Cook mainly referred to China when he said that people were holding back on buying an iPhone, “because there’s a tendency there to buy the latest thing”. But he quickly added, “although I have to say, the 7 Plus has done extraordinarily well there, and it’s up double-digit from the previous year”.

When asked whether Apple is concerned about people switching to Samsung, Cook said:

“No, we don’t see much of that. We don’t want to see any of that, and we try really hard to retain people by giving them an experience that they really love. That’s our objective. But generally speaking we measure that fairly closely, and we don’t see very much of that. On the switcher side, we were very pleased that we set a record for switchers outside of China for the first six months of this fiscal year. As you know, we start in October and we just finished the first half in March. And we set a record there and we set a record for upgraders across the world. And so this felt really good.”

Addressing Cramer’s question about what Apple does to create jobs, Cook said that Apple gives back in job creation: The company employs 80,000 people in the US, (of those 25,000 do R&D), and it has another 6,000 people in a huge facility in Austin, but he also emphasised that Apple is buying from US suppliers, companies that manufacture in the US. He named Corning and 3M as examples. Corning supplies the glass for the iPhone and the iPad. Apple spent $50 billion last year in the US alone, Cook said.

You can watch the videos or read the full transcript of the Tim Cook interview on CNBC.