Earlier today it was discovered within the Eurasian Economic Commission database Apple was set to release a new iPad, as a model “A2229” showed up.

Now, it appears Apple’s own website in China has leaked what these iPads entail, in the form of new 11-inch and 12.9-inch iPad Pros in both Wi-Fi and Cellular versions.

Apple’s iPad user manual in China lists the following iPad Pro configurations with model numbers “A2229” seen today, along with others: A2228; A2231; A2233. These represent 11-inch and 12.9-inch iPad Pro models followed by their China Ministry of Industry and Information Technology (CMIIT) ID:

These iPad Pro models are listed in the section detailing radio frequency exposure and how iPad uses radio signals to access wireless networks, according to Google Translate. The discovery was posted on the Chinese website Feng by user MarcusKei.

Below is a screenshot showing the new iPad Pro model numbers: 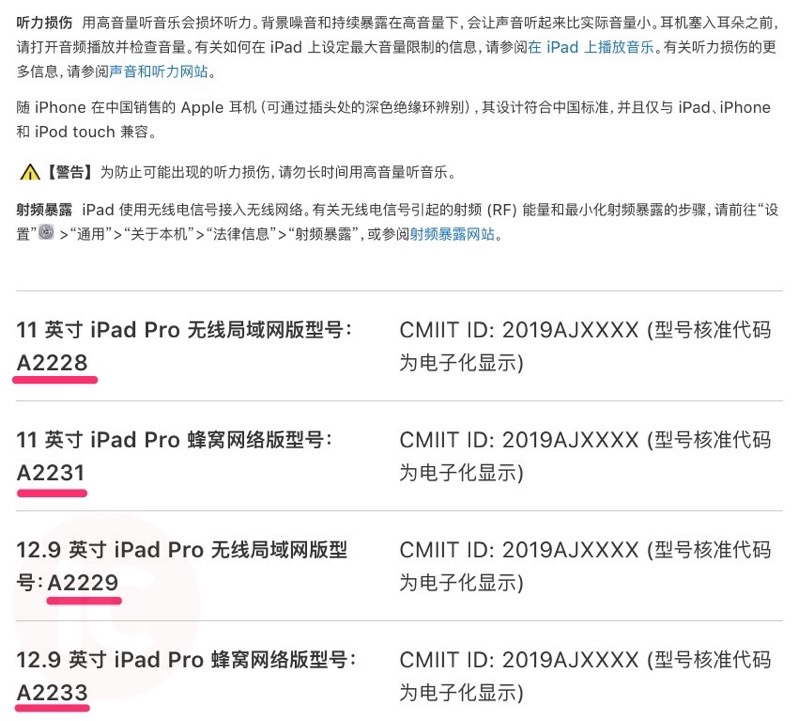 Back in July 2019, the model A2228 showed up in Eurasian Economic Commission certification documents, alongside four other models. Three of these five model numbers ended being the iPad 7th generation (A2200, A2197, A2198).

While no features of these iPad Pro models are detailed, rumours claim a new rear camera system will debut with three lenses (most likely borrowed from iPhone 11 Pro?), sporting a time-of-flight 3D camera to support augmented reality applications.

Last year, rumours claimed Apple was going to release an iPad Pro with three lenses but that never materialized. Apple may have pushed back the refresh, hence why we are seeing the model A2229 still applicable today.

Apple launched new Powerbeats 4 earlier this morning and we may hear more product releases soon, including rumoured debuts of an ‘iPhone 9’ and ‘iPhone 9 Plus’.

Update March 17, 2020: Apple has updated its website to remove mentions of the new iPad Pro models, as expected.