Apple is set to shut down its MobileMe services next month on June 30. If you are a current MobileMe member, or more likely an iCloud member, you have been aware of the upcoming transition for about a year.

However before the shut down, Apple has quietly decided to extend the free period of 20 GB of extra iCloud storage (you already have 5 GB to start), which was given to previous MobileMe members, until September 30, 2012.

Originally the free 20 GB was to expire on June 30, 2012 once MobileMe shut down, which would take the storage from 25 GB to 5 GB. The updated MobileMe/iCloud transition page now reads:

MobileMe members with 20GB of purchased storage receive a complimentary iCloud storage upgrade of 20GB, and accounts with additional purchased storage (40GB to 60GB) receive a complimentary upgrade of 50GB after moving to iCloud. These free upgrades are good through September 30th, 2012. After that date, you can continue the upgrade at the regular price or let it expire and use the free 5GB plan.

For most users, 5 GB will be enough after the 20 GB expires. However, as noted, users will have the option to upgrade as needed. 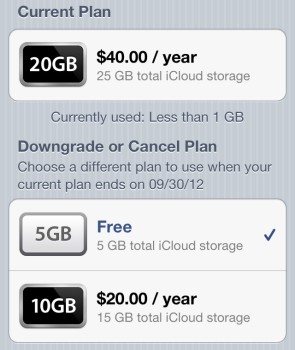 The Roku Channel has shared its list of free movies and TV shows hitting the ad-powered streaming service in Canada for October 2022. Check out the full list below Movies The Death and Life of John F Donovan The Intruders Mama Rhymes for Young Ghouls Wolves The Woman In Black Alaskan Nets The Delinquent Season […]
Gary Ng
60 mins ago