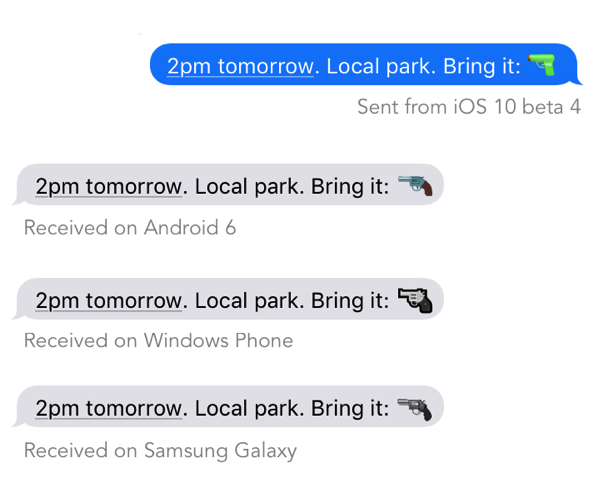 So if Apple goes ahead with this change in the public iOS 10 release, one person could innocently tweet a toy and have that be seen by others as a weapon, as shown above. A better solution for Apple, as suggested by Emojipedia, would be to hide the handgun emoji instead of changing it. The pistol emoji could be removed from the iOS emoji keyboard without causing any cross platform compatibility issues.

As John Gruber puts it:

“Hiding the pistol from the emoji keyboard is timid. Changing it to a toy is a statement, indicating that Apple wants no part of the gun culture here in the U.S. I support Apple changing this glyph to a toy — but if they do otherwise, they should drop the glyph completely, and display the “missing glyph” box for the pistol’s code point”.

Ironically though, Microsoft switched Windows’s pistol emoji from a toy ray gun to a realistic revolver earlier this week. Take a look by clicking here.