Apple Launches Self Service Repair Program, U.S. Only for Now 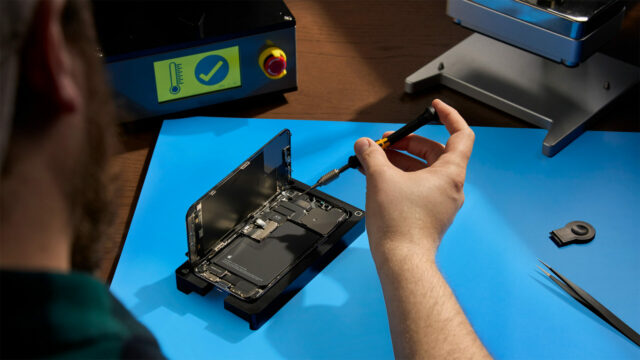 For more than a decade, Apple has made it difficult for customers to replace a battery or screen. Now it’s selling repair parts to everyone.

In a press release, Apple announced that its Self Service Repair online store is now available in the United States, with more countries being added later this year, beginning in Europe.

After years of pressure from activists, consumers and more, Apple has finally relented — at least partially — to the right to repair movement. Starting today, anyone can buy a host of genuine Apple parts and tools from a website called the Self Service Repair Store.

US fixers can now buy iPhone 12, 13, and SE 3 parts and tools from Apple, with parts available for the battery, bottom speaker, camera, display, SIM tray, and taptic engine. Over the next year, the program will extend to M1 MacBooks and from there to Europe, with other products and markets on the horizon.

Prices paid will include a credit after once you return your original part that’s being replaced.

Apple said it designed the program to offer adventurous and capable people access to the same parts, tools and instructions it gives to its own certified technicians and partner repair shops, hopefully making it easier for people to repair devices instead of resorting to buying a new one.

“We believe we have a responsibility to customers and the environment to offer convenient access to safe, reliable, and secure repairs to help customers get the most out of their devices,” the company wrote in a document published Wednesday that outlines its plans.

The Self Service initiative is a clear response to mounting pressure to adopt Right to Repair policies. In the US, both federal- and state-level officials have either enacted or proposed Right to Repair rules. There’s also growing advocacy from everyday customers, and leaked emails have suggested that Apple itself has held debates over its sometimes difficult-to-fix products. The program theoretically reduces the incentive to pass repair-friendly legislation and might soften overall public criticism.

It’s good to see this program, which was announced last fall, launch. The products are limited for now, but more iPhones are sold than any other Apple product, so it makes sense to start with it and expand from there. No word on when the repair program will make its way to Canada, but one would expect that to happen sometime in the future.