Latest numbers from smartphone analytics firm Canalys have revealed that smartphone shipments in North America saw an 18% year-on-year decline in the first quarter of Q1 2019 to hit a five-year low of 36.4 million units, down from a record high of 44.4 million in Q1 2018. 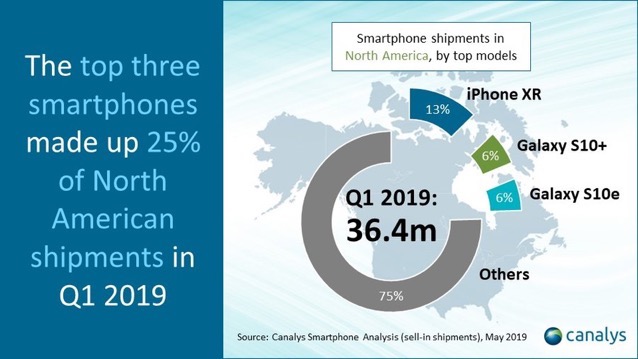 While the region’s biggest ever recorded fall in smartphone sales is being credited primarily to Apple’s lackluster performance, the iPhone maker remained the clear leader despite suffering a regional decline of 19%. Apple shipped over 4.5 million iPhone XR handsets in Q1 2019, whereas South Korean rival Samsung sold more than 2.0 million each of its Galaxy S10+ and S10e devices.

Apple’s fall in Q1 followed particularly high shipments of flagship iPhones in the previous quarter, said Canalys Research Analyst Vincent Thielke. But there was a disconnect between channel orders and consumer demand, which then caused early shipments in Q1 to be challenging for Apple. But moving into March, we did see an uptick in iPhone XR shipments, an early sign that these challenges may be starting to ease at home.

But the key challenge in coming months remains that its latest iPhones are just not different enough, though new ones are on the way.

You can view the full report at the source page.