Earlier today, Apple announced it would hold its upcoming special event on September 9, at the Bill Graham Civic Auditorium in San Francisco (seating for 7,000!), where many expect the company to announce its next iPhone models.

In what appears to be the norm now, Apple has updated their Events page to announce they will be live streaming the keynote on September 9 at 10AM PDT/1PM EDT for everyone to view online. Below are the requirements to tune into the live stream, which now supports Windows for the first time (previously, people had to use this workaround), particularly those on Windows 10 via Edge, the new browser from Microsoft: 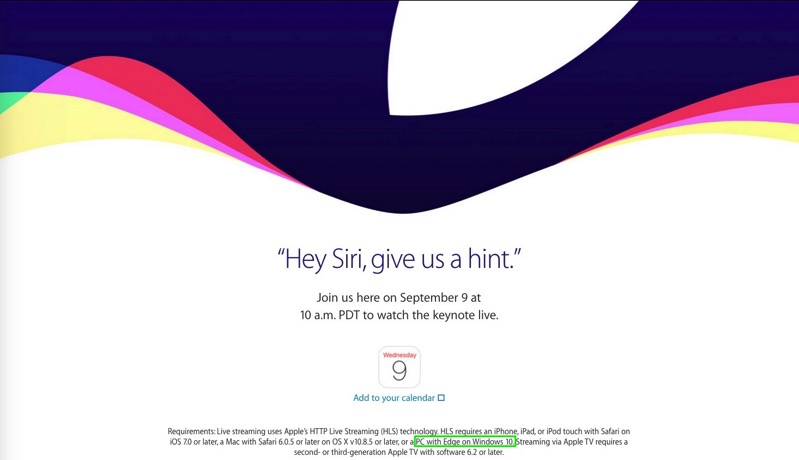 Live streaming uses Apple’s HTTP Live Streaming (HLS) technology. HLS requires an iPhone, iPad, or iPod touch with Safari on iOS 7.0 or later, a Mac with Safari 6.0.5 or later on OS X v10.8.5 or later, or a PC with Edge on Windows 10. Streaming via Apple TV requires a second- or third-generation Apple TV with software 6.2 or later.

Normally the Apple Events channel on Apple TV would appear and then disappear after special events. However, the channel has remained on Apple TV after WWDC 2015 and now looks to become possibly permanent.