United States Patent & Trademark Office has today awarded a new patent to Crucible Intellectual Property, the shell company that represents an exclusive licensing tie-up between Apple and Liquidmetal Technologies, hinting at the possibility of Liquidmetal iPhone, iPad and other Apple devices in the future, Engadget is reporting (via Electronista). 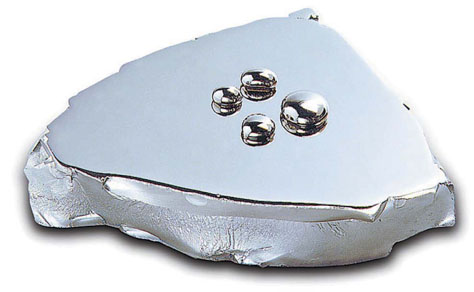 Liquidmetal, the material used in Apple’s SIM ejector tool, is apparently a bit too expensive for anything bigger right now due to its tough chemical properties and unusual capacity for intricate moulding. Currently, Apple holds an exclusive license for the development and sale of the material in the consumer market. However, the source notes that so far, attempts to use Liquidmetal to mass-produce larger objects, like the bodies of phones or tablets, have failed because stretching and other traditional techniques cause the stuff to break.

“Now, we can’t claim dwarven levels of expertise on the subject, but we’re inclined to agree with the interpretation of the folks at Electronista, who spotted that the patent describes a range of factory methods (generally involving lots of melting and conveyor belts) for creating sheets of metallic glass of controllable thickness between 0.1mm and 25mm and in widths of up to three meters. The paperwork explicitly mentions the use of these sheets in making iPhones, iPads, watches or indeed “any electronic device known the art.”

The patent also claims that a plant utilizing the new method which operates non-stop for up to 15 years can make about 6,000 kilometers of Liquidmetal a year.