As spotted by Mashable, Apple’s Maps and Weather apps now mark Crimea as part of Ukraine when viewed outside of Russia. The iPhone maker seems to have taken a notably stronger stance than the one it took back in 2019. 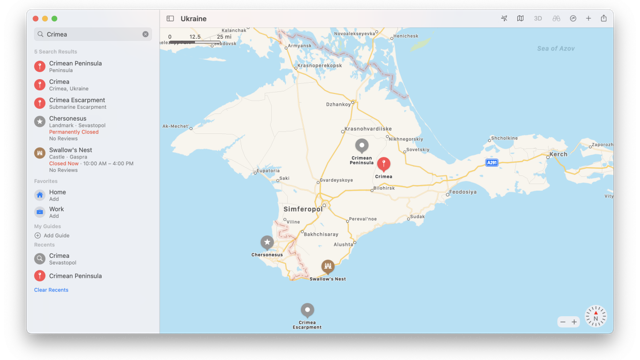 Earlier this week Apple responded to the invasion by suspending product sales within Russia. The company also removed RT News and Sputnik News from App Stores outside of Russia.

“We are deeply concerned about the Russian invasion of Ukraine and stand with all of the people who are suffering as a result of the violence,” Apple said in a statement. “We will continue to evaluate the situation and are in communication with relevant governments on the actions we are taking.”

Back in 2014, Russia annexed Crimea from Ukraine conducting a military invasion of the peninsula and installing new officials. A referendum was then held asking how Crimea would like to leave Ukraine, providing no option for it to remain.