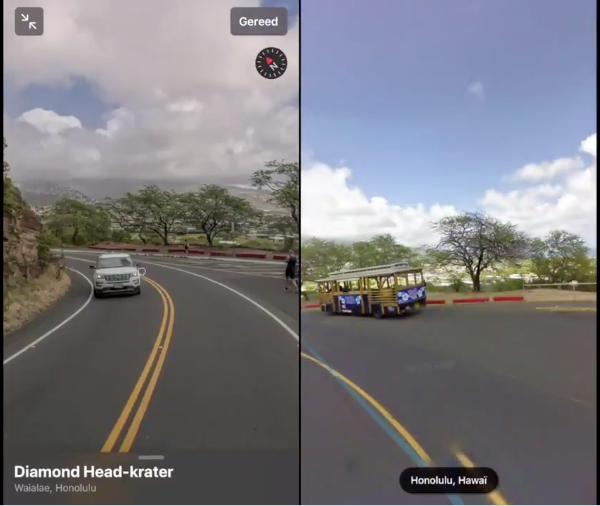 iOS 13 will include a new feature for Apple Maps called Look Around, which is essentially the iPhone maker’s version of Google Street View.

Here’s how Apple describes its new Look Around feature:

Powered by the new basemap and high-resolution 3D photography, a new Look Around feature delivers beautiful street-level imagery of a city with smooth and seamless transitions.

However, the difference between the two is Apple’s solution allows for much smoother scrolling versus Google Street View, which you can see in a clip posted by @rvdsteege on Twitter, a WordPress developer in the Netherlands.

“Made a quick side-by-side comparison video driving the same road in Hawaii with ‘Look Around’ in Apple Maps on #iOS13 vs Google Street View. It really is “smoothly move down the street”! Impressive”, writes van der Steege.

Check out his video below:

Made a quick side-by-side comparison video driving the same road in Hawaii with 'Look Around' in Apple Maps on #iOS13 vs Google Street View. It really is "smoothly move down the street"! Impressive ? #WWDC19 #iOS13Beta #AppleMaps #GoogleMaps #Apple #maps pic.twitter.com/nIA3kklhJe

You can see how Apple’s Look Around feature offers smooth transitions as you’re travelling around, versus Street View. Apple is currently driving Apple Maps Cars around certain cities and countries for this new feature, including numerous locations in Canada.

Below is a quick clip of an Apple Maps Car doing its ‘thang’ in Whiterock, B.C.; the cars have been spotted throughout the country, as part of Apple’s summer mission to gather mapping data, as previously announced in May:

The Look Around feature in Apple Maps is very smooth indeed, when compared to Google Street View. Personally, I’ll take a chunky Google Street View versus not having any street-level view in a city or area I’m searching for. I also favour how Google presents information for points of interests, such as showing popular times and more, versus Apple Maps using data from YP.ca.

Will Apple Maps in iOS 13 make you switch from Google Maps?