Last year, when Apple previewed iOS 9 at WWDC and debuted upcoming changes to Apple Maps, Toronto was the only Canadian city to support Transit view directions.

That appears to have changed now, as iPhone in Canada readers have told us Montreal is now supported as well, as of two days ago. 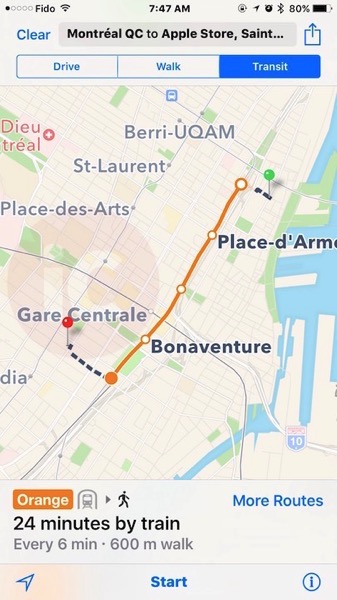 For Montreal transit users, just plan your route and you should see support for Transit view, as pictured above. For cities where Transit view is not supported, a message noting “Transit directions are not available in this area,” with a link to other Routing apps such as TransitApp.

Let us know if you’ve been using Transit view for Montreal in Apple Maps, and if you’re seeing support for other Canadian cities in the comments below.

Update: Apple Maps for the GTA also recently gained Durham Region Transit support, as of the past few weeks (thanks @twinparent).