In a recent memo to investors, Loup Ventures analyst Gene Munster has suggested that Apple Music is gaining new subscribers at a rate 2.5x faster than Spotify while estimating that Apple’s music streaming service now has over 21 million paying subscribers versus Spotify’s 20 million in North America, AppleInsider reports. 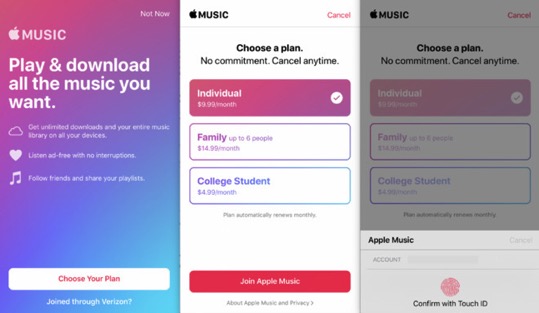 While attributing Apple’s impressive rate of converting potential customers into paying customers to “iPhone owners having more disposable income”, Munster says that even bigger factor is Apple’s control of iOS which offers both a seamlessly integrated music experience and “built-in advertising working to persuade people to subscribe”.

Munster adds that Apple Music still has “room to grow” with 45 million global subscribers out of some 780 million active iPhone users.

Spotify is said to have at least one advantage, which is that it works well on both iOS and Android devices. While Apple Music is technically available for Android, Munster estimates that 95 percent of subscribers are on iOS. Many of the reasons to use the service disappear on Android, such as Siri voice commands or HomePod compatibility.

Nonetheless, Spotify is still said to dominate the global music streaming market although its share has slid year-over-year from 65 to 62%, whereas Apple’s market share has grown from 30 to 34%.