According to a BusinessInsider report, analyst Kulbinder Garcha and his team from Swiss Bank Credit Suisse, believe that Apple is developing a new and improved ‘low-end’ 4-inch display iPhone, adding weight to KGI Securities analyst Ming-Chi Kuo’s report from a few days back, claiming that Apple is planning a new 4-inch phone that would essentially be an upgrade to the iPhone 5s. 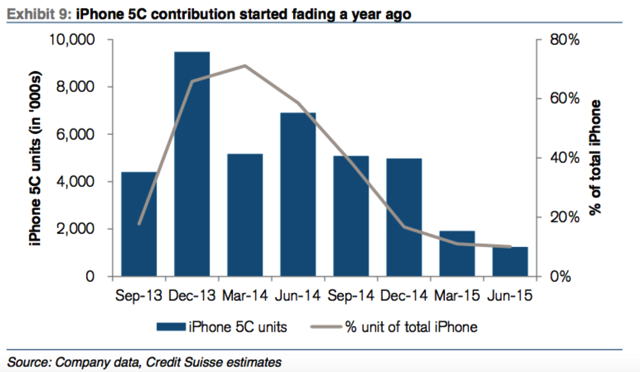 The source highlights that Garcha reported back in September that Apple’s Asian supply chain partners were beginning to anticipate the reintroduction of a 4-inch iPhone model, “which could drive incremental volumes beyond our estimates during 2016”. Last month, when Apple raised its capital expenditure guidance by $2 billion, to $15 billion, the Credit Suisse team said this guidance implied an “iOS unit estimate of 339M which could be early confirmation of Apple perhaps considering a lower end iPhone product”.

Here’s what Credit Suisse analysts are now saying about the ‘iPhone 6c’:

After the relative failure of the iPhone 5c, why would a smaller, lower-end iPhone work now? While we do not currently include this new smaller screen iPhone in our estimates, we do believe a 4” iPhone, without force touch, would be a noticeably different form factor than Apple’s existing products and could be incremental to both revenue and EPS. If this new lower-end iPhone is launched in 2016, we believe it could be around $0.62 additive to CY17 EPS, and, could drive iPhone units towards 265mn long-term, even allowing for cannibalization of 4%.

… we see an increasing probability that Apple will launch a 4-inch “iPhone 6c”, which we believe would be incremental to our current units and revenues and would add around 6-7% to EPS estimates long-term.

The analysts also said that Apple may experiment with a range of features to include or exclude from this 4-inch device, such as the camera, force touch, or touch ID.