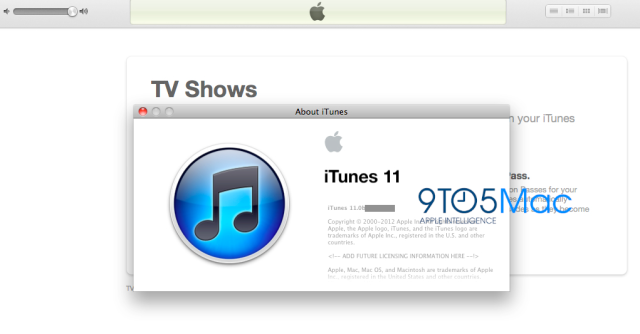 Apple has internally seeded a beta version of iTunes 11, according to 9to5Mac. This build of iTunes is said to have support for iOS 6, and brings a lot more iCloud support. The source says this may not be the next release, but it could be released before the end of the year.

When there’s a big update for iTunes, that usually means there is a new iOS or OSX update on the way. We know OS X 10.8 Mountain Lion is due out this summer, so could iTunes 11 be included? It certainly isn’t included with the current developer preview. With support for iOS 6, it is more likely slated for release this fall, with the next version of the iPhone (iPhone 5? The New iPhone?).

9to5Mac’s source claims there is new iCloud support in iTunes 11, that is easily accessible at any time. Apparently there is a new, centralized iCloud panel in the iTunes settings, giving the user quick access to iTunes Match, iTunes in the Cloud, iCloud iOS device backups and more. 9to5Mac says they have seen more of this new iTunes, and will be reporting more soon.