A patent titled “Lens array projector” issued by the U.S. Patent and Trademark Office (USPTO) to Apple in one of the first reassignments from the Cupertino company’s purchase of Israeli firm PrimeSense, that specializes in 3D motion sensing and machine vision, suggests that the tech giant is moving forward on development of advanced body gesture control for Mac, Apple TV and iOS, AppleInsider reports. 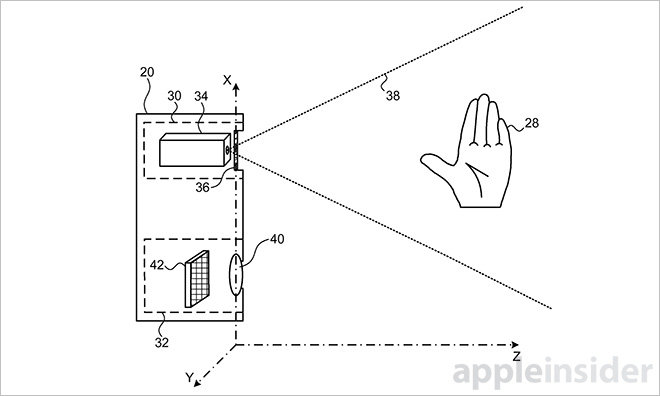 “Called a beam homogenizer, Apple’s invention receives input from a matrix of light sources, such as laser diodes or similar components, that are arranged in a predetermined, uniform fashion. When light reaches the homogenizer, it passes through a first microlens array with lenses disposed at a pitch equal to the light source matrix. A second microlens element constructed with a different pitch receives and focuses light from the first array, passing it on to a collection lens for collimation.

When light passes through two microlens arrays with different pitches, and different geometric arrangements, it mixes due to the offset to produce a final beam that averages out deviations like laser speckle.”

It has been previously rumored that the next-gen Apple TV would employ 3D mapping as a gesture-based control scheme, similar to Microsoft’s Kinect.

Tesla CEO Elon Musk looks to be giving up on terminating his $44 billion USD bid for social media giant Twitter, now proposing to go through with the acquisition on the original terms — reports Bloomberg. According to Bloomberg's sources, Musk proposed closing the deal for the original offer price of $54.20 USD per share...
Nehal Malik
56 mins ago

Google on Tuesday announced new product updates, and its latest includes the debut of the Nest Wifi Pro with Wi-Fi 6E support, the first router from the company that is triband mesh network ready. Wi-Fi 6E (E for Extended) leverages the new less-crowded 6 GHz radio band and offers speeds up to two-times faster than […]
Gary Ng
1 hour ago

Google today announced a major update for the Google Home app that brings a fresh new design, Matter integration, support for both Wear OS and the web, and plenty of new features. The company said it set out to reimagine Google Home because the number of average connected devices per user has gone up from...
Nehal Malik
2 hours ago