The Smart Connector Apple first introduced with the 12.9-inch iPad Pro and added to the recently introduced 9.7-inch version may now be limited to a single accessory, but this isn’t what the company had in mind; at least this is what the latest patent application granted by the USPTO — and spotted by AppleInsider — suggests. 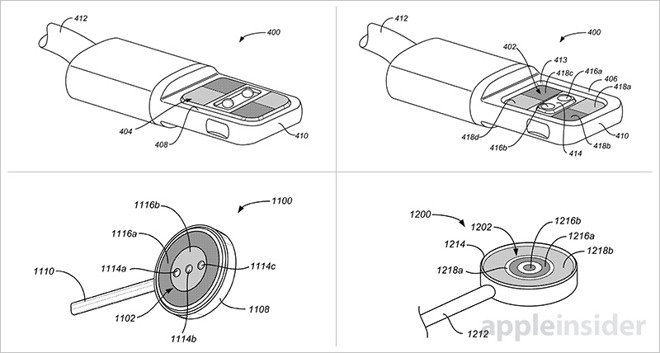 US Patent No. 9,300,083 for a “Stackable magnetically-retained connector interface” outlines a method by which two or more plugs of peripheral devices can be stacked vertically, one atop the other, on a single surface-mounted connector.

The patent outlines two embodiments – one featuring two contacts, the other, three. You may already know that the Smart Connector uses the latter. Both embodiments include a magnetic retention mechanism (remember MagSafe?) that aligns and secures accessory cables or accessories.

When the magnetic connector mates with a host device, either directly or through the stack, the attached peripheral sends a signal informing onboard detection circuitry that a positive connection was made. Said signal also provides information regarding the plug’s orientation, a critical piece of information for correct power and data routing. The control process is managed by routing circuitry on the host device and, for power, one or more microcontrollers.

Apple uses the example of connected earphones that would mate with the host device and, after successful plug mating, request power and audio data. In another example, an AC/DC adapter would signal availability of extra power for charging both the host device and connected accessories. From Apple’s perspective, any number of peripherals could benefit from this stackable architecture, including keyboards, battery packs, external storage units, and so much more.