Analysts have been watching the adoption rate of Apple Pay in stores, and you may already be familiar with their verdict: Despite being available for more than a year, in-store Apple Pay transactions have failed to gain traction, at least not in the way that was expected. But there is something the analysts have missed: in-app purchases. Since its launch, Apple Pay has made serious progress in mobile commerce, just as Eddy Cue expected.

Speaking with the Wall Street Journal on the day Apple Pay went live in the US, Apple’s Senior Vice President of Internet Software and Services Eddy Cue said that Apple expects in-app purchases to make up the vast majority of early transactions.

Piper Jaffray analyst Gene Munster’s research corroborates the company’s forecast: While in-store transactions have yet to take off, possibly due to hardware limitations (the POS has to support contactless payments), there has been “an acceleration in the number of apps that accept Apple Pay,” which he calls an “inflection point.” Apple told Quartz that Apple Pay is now supported by “thousands” of apps. 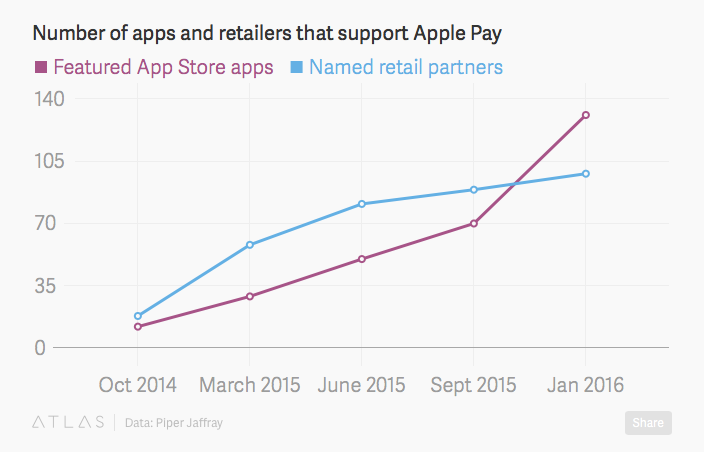 Fact is, it’s much easier to add Apple Pay support to an app than to a store. While the former requires just a few lines of code, the latter means investment in pricey POS terminals.

Quartz has interviewed several mobile commerce players who have added support for Apple Pay, and the consensus is that, besides speeding up the checkout process, Apple Pay has also increased the likelihood of a purchase being made.