Apple has flicked the switch for Apple Pay down under in Australia, as the Sidney Morning Herald reports the service has gone live. The launch is similar to Canada’s yesterday, as initial users right now are able to add their American Express cards to Apple Pay with region settings set to the United States.

Apple also updated their Apple Pay participating banks and store cards page, to note the addition of Australia. (seeing Canada listed there too brings tears to my eyes): 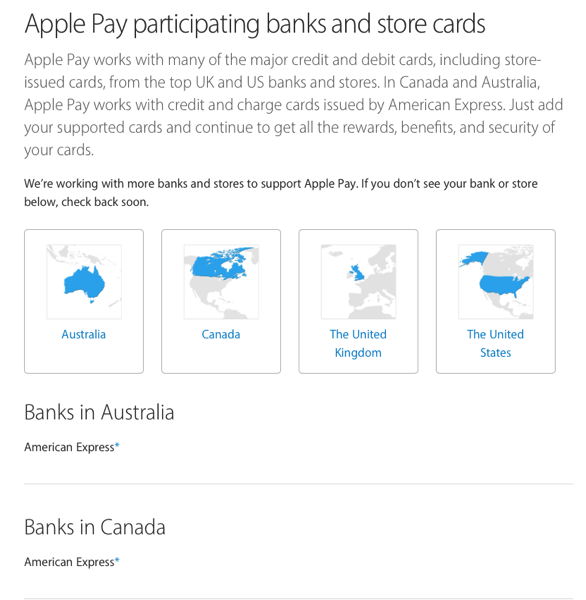 Eventually, the Wallet app will gain an over-the-air update to allow Amex cards to be added. The situation in Australia rivals Canada, as the former’s four big banks are reportedly refusing to give up interchange fees to Apple, which are at half the levels in the U.S., at $0.50 of every $100 transaction.

Commonwealth Bank of Australia chief executive Ian Narev, claimed Apple Pay will not be easy to negotiate in the country, given the financial institution’s innovation in the mobile space (they have a mobile wallet for Android phones), saying “There is functionality associated with Apple Pay that we have had in the market for 18 months to two years.”

First, because they are being forced by the RBA to tip hundreds of millions of dollars into building the New Payments Platform, new infrastructure that will have real-time capability, there are concerns about Apple seeking to free ride on this investment.

Second, the negotiations are also challenged because banks are concerned about the prospect of Apple getting in between them and their customer at the point of sale, as banks recognise that future revenue growth will come from being the “interface” when customers pay for goods and services, which will allow them to cross-sell products.

The second point sounds similar to what is happening in Canada. The big banks here do not want Apple or other third parties getting in the way of their customers.

According to The Globe and Mail, Dave McKay, Royal Bank of Canada’s chief executive officer, told a New York audience in March “The last thing anybody wants is to have someone between you and your customer, and that’s what we now have in the payments space.” McKay at the time said the bank was “on a collision course” with the likes of Apple and Google, acknowledging RBC taking on tech giants is not something it would do unless absolutely necessary.

Want some fun reading for today? Head over to the Twitter accounts of TD Canada Trust, BMO, Scotiabank, RBC and CIBC, and you’ll read tonnes of customers letting these banks know how they feel about the lack of Apple Pay.