Today Apple Pay launched in Canada for American Express cardholders. If you haven’t tried out the service yet, it’s fast and really easy to use–that is if you’re at a retailer that accepts Amex and has tap-to-pay enabled.

Here’s a quick and dirty demo I filmed at my local Shopper’s Drug Mart in the picturesque seaside town of Sidney, BC.  The population here is mostly retirees so when I told the cashiers I wanted to record myself trying Apple Pay, I saw some eyes glaze over. They weren’t sure if it would work (and what it was), but I told them let’s try it anyways. 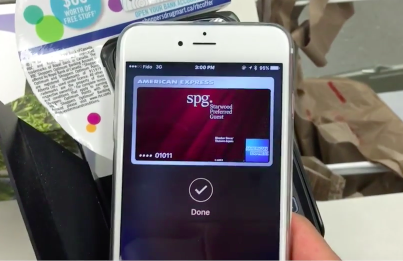 So when I whipped out my iPhone 6s Plus to pay, it happened very quickly (for our purchase of a box of Kleenex tissue on sale for $0.89). We bought a second box with Apple Watch, but I forgot to record it as it happened so quickly, so we ended up buying a box of Halloween Smarties for $0.50. You have to love the things you buy to test Apple Pay.

To use Apple Pay on your iPhone, move the phone next to the terminal’s screen with your finger on Touch ID so it’s ready to immediately authenticate. Apple Pay will show up on the lockscreen automatically. If you want to switch cards beforehand, you can double-tap the home button to do so (if the setting is enabled).

On Apple Watch, you need to double-tap the side button to bring up Apple Pay. Then, just move your watch near the terminal and it’s done. There’s no need to authenticate, as your initial entry of your passcode when you first put the watch on in the morning is all that is required.

By the time both demos had ended, the employees were a bit shocked and impressed at what just happened. I didn’t have time to explain how Apple Pay works other than it was just my American Express on my iPhone. And just like that, I dusted off my shoulders and strutted out of there like a boss (#micdrop).

Where were you able to test Apple Pay today?