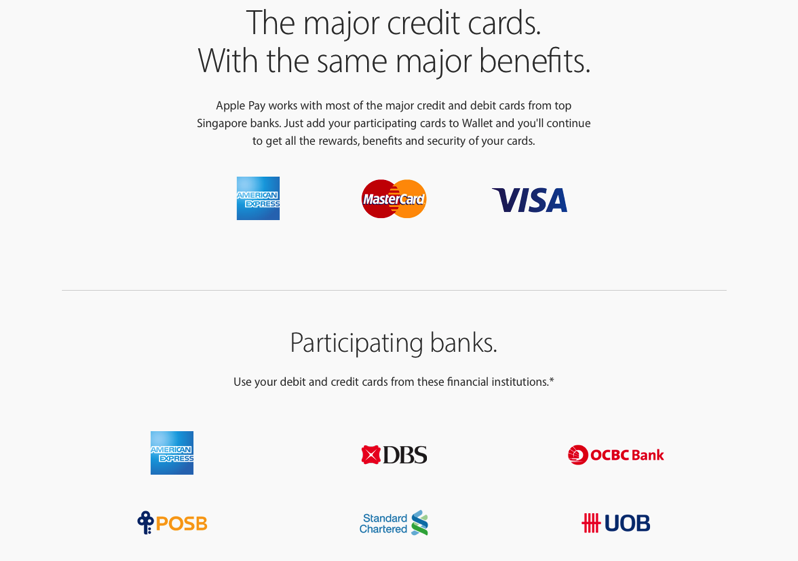 After limited support from American Express, Apple Pay is finally supported by Visa, MasterCard and five major banks in Singapore.

As of today, POSB, DBS Bank, OCBC Bank, United Overseas Bank (UOB) and Standard Chartered Bank — which account for more than 80% of the Visa and MasterCard credit and debit cards issued in Singapore — allows its customers to add their credit or debit card to the Apple wallet app and use it with Apple Pay for in-store transactions.

Apple Pay launched in Singapore last month and until now both Visa andMasterCard as well as a long list of a stores were listed as “coming soon.” That changed this morning as Apple Pay vice-president Jennifer Bailey told The Straits Times:

“Now, almost everyone can leave their wallets at home. Apple Pay will be a natural extension of what users have been doing at payment counters.”

To add Apple Pay support banks have to install new back-end systems according to the Straits Times. This could be a reason why Citibank, HSBC, ANZ and Maybank refrained to support Apple’s mobile payments service so far.

Gaining support from major financial institutions is important for Apple, as its competitor, Samsung Pay is about to launch there, backed by both Visa and MasterCard and a number of banks such as DBS/POSB, OCBC Bank and Standard Chartered.