Apple Pay has launched for Desjardins customers, after the bank has been teasing the mobile wallet was coming soon:

The announcement was exclusively made within the digital iOS edition of La Presse earlier this morning, just after 6AM EDT, leaving many customers excited: 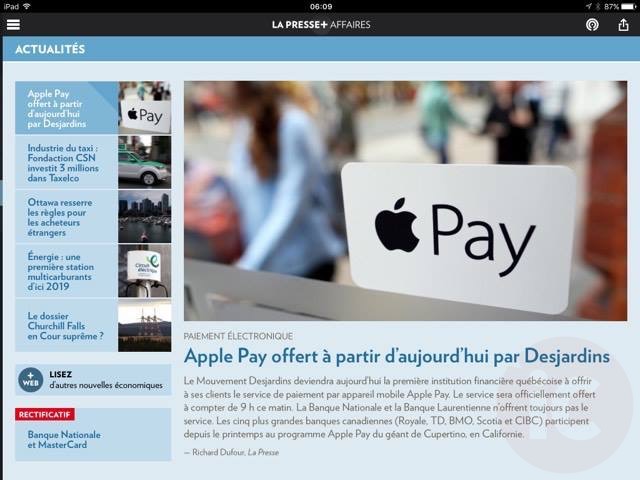 “Desjardins is proud to add Apple Pay to our line of mobile services—our members and clients can now benefit from this secure and easy to use payment service,” stated André Chatelain, Executive Vice-President, Personal Services, Payments and Desjardins Group Marketing. “Today, smartphones are basically indispensable and demand for mobile services—mobile payment in particular—is only going to grow.”

Thanks JFM and everyone!

Apple announced on Monday its music streaming service now has 100 million songs in its library. Apple said, “Twenty-one years on from the invention of iTunes and the debut of the original iPod, we’ve gone from 1,000 songs in your pocket to 100,000x that on Apple Music. It’s phenomenal growth by any metric. The entire […]
Gary Ng
5 mins ago

According to a report from Reuters, an administrative court in Italy has overturned a combined €200 million ($195.3 million USD or $268.23 million CAD) fine imposed against Apple and Amazon by the Autorita’ Garante della Concorrenza e del Mercato (ACGM), the country's antitrust authority, following an appeal. The fine in question was levied on the...
Nehal Malik
42 mins ago