While we have Apple Pay in Canada for American Express cardholders, many Canadians are eagerly awaiting support from banks. While some may doubt Canadian banks are close to being on board, a recent leak by TD Canada Trust is the closest evidence we’ve seen of a ‘Big 6’ bank jumping on board. 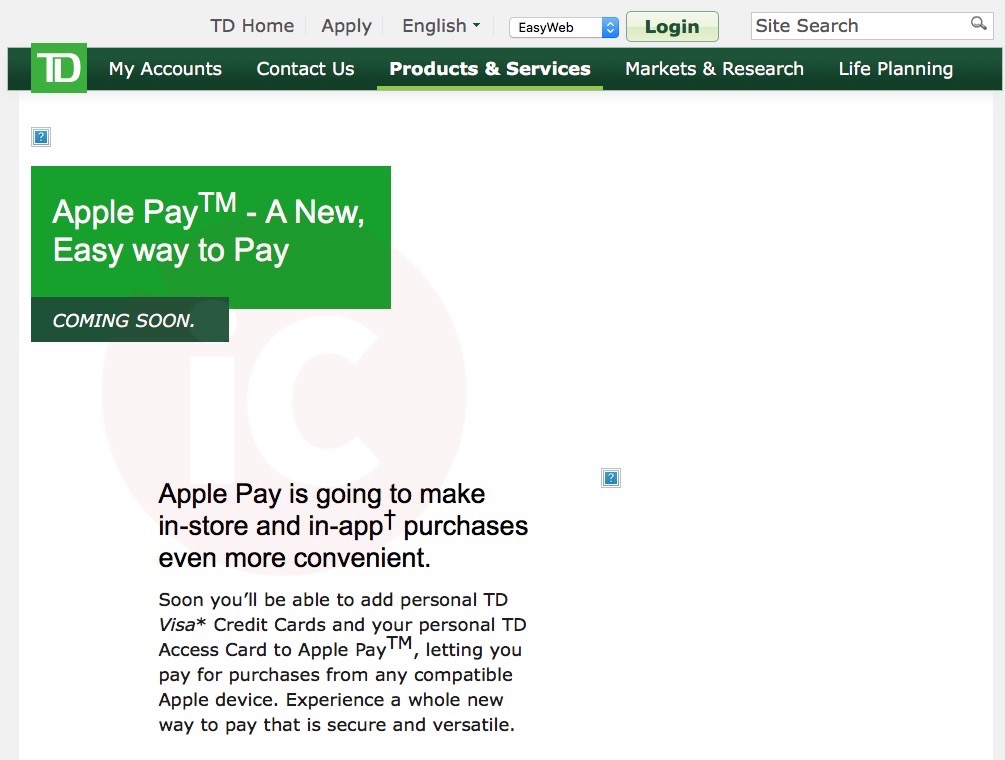 Now, a Reddit user claims people he ‘knows’ that work at an unnamed Canadian bank are pilot testing Apple Pay with credit and debit cards. Here’s what user OhMiGodWeeee had to say, in his edited post:

Stop with the “Canadian Banks don’t want Apple Pay” posts. There is no proof of this and this is actually incorrect.

I happen to know people who work at a bank and are using Apple Pay right now with their bank debit and credit cards. Some banks already have the service up and running and only a select few employees are using it as part of a pilot. I can’t speak on all banks but usually if one bank is doing it, they’re all doing it (or will do it). The banks have to wait for Apple to give them the “green light” to release this to the public. I assume Amex was quick and easy since they support a smaller segment of the customers but banks with Visa and MC plus debit cards will need to negotiate additional details around the use of this service.

Stop jumping to conclusions. These banks employees (invoked with this) have signed NDA’s and can’t go around speaking about this and providing dates.

Just rest assured that this WILL be available to customers and the banks (I can only speak for a specific bank) will have the service available to the eager public within a couple months. Be patient.

Edit: had to remove some info

The response was made in a thread discussing how Canadians should “Submit a complaint to the Competition Bureau of Canada against your bank for refusing to support Apple Pay.”

We’ve heard whispers of BMO reportedly planning support for Apple Pay, while some have noted RBC’s online chat may have leaked upcoming support as well. Earlier this morning, it was reported banks in Australia had “effectively boycotted” Apple Pay, according to the country’s Reserve Bank governor.

We’re only 10 days into Apple Pay and the lack of Canadian bank support has made people go crazy. Definitely a case of #firstworldproblems.
Thanks @JXChain