There is one thing you, as a reader, need to know about Apple’s PR: It only answers to media inquiries if it wants to. As Mark Gurman of 9to5Mac puts it: Apple’s PR isn’t a particularly friendly queen, since it is too busy to be bothered, “until for some reason, she’s not.”

So how does this PR machinery work, and how does it manage to orchestrate buzz around its products? Mark Gurman has an extensive piece — the product of two months of work — that looks into the backstage of Apple’s PR department.

For those who expected Apple to have an army of PR and Communication specialists, Gurman’s piece reveals a surprise: There are only around 30 employees in Apple’s Cupertino offices, and there are another few dozen individuals scattered around the world focusing on organizing events, translating press releases, etc.

While the overall impression is that Apple doesn’t care about what the media says, the reality looks exactly the opposite: “It is more like a teenage girl obsessively keeping her fingers on the pulse of coverage.”

Members of Apple PR seek tabloid photos of celebrities holding iPhones, while others read Apple-focused blogs actively, and keep tabs on prominent Apple beat writers using anonymized social media accounts. A former Apple PR employee notes that the team enjoys being an “overall watchdog,” monitoring what the media is saying about the company every day. This oversight is so important to Apple that a few times a week, top executives are sent a document detailing the company’s latest press coverage. When Apple is not pleased with coverage, it sometimes works to shift the narrative, even attempting to undermine giant news organizations. 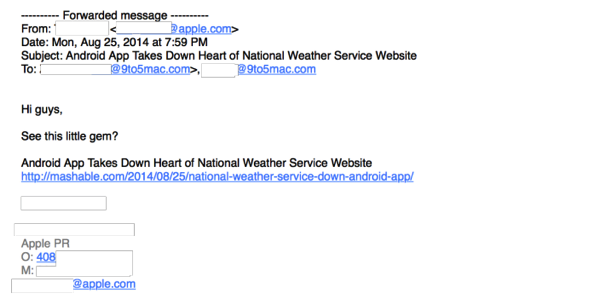 For example, 9to5Mac received an email from Apple’s PR in an attempt to discredit Android by highlighting an Android app’s failures.

Although it will grab some of your precious minutes, the whole Apple PR piece is definitely worth reading. You can read the full story by following this link.