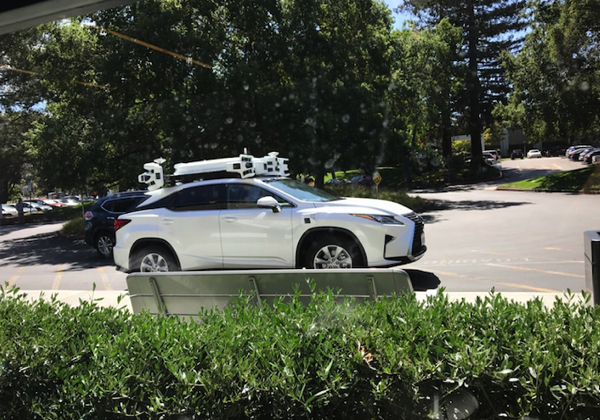 A new video captured and shared by MacCallister Higgins, the co-founder of self-driving startup Voyage, gives a closer look at what seems to be one of Apple’s “Project Titan” self-driving cars (via The Verge). Encased in Apple-esque white plastic, tons of sensors, including six Velodyne-made LIDAR sensors, several radar units, and a number of cameras, have been fitted on the car.

Going to need more than 140 characters to go over ????’s Project Titan. I call it “The Thing” pic.twitter.com/sLDJd7iYSa

Higgins referred to the vehicle as “The Thing” due to the bulkiness of its sensor array. When asked if he caught a look at the compute stack, he said that it was likely located on the roof with the sensors, which would indicate a departure from other self-driving car operators, who typically load their GPUs in the vehicles trunks.

“When you compare Apple’s car with the latest iteration of Waymo’s self-driving minivan, the differences are striking. While Waymo has minimized and streamlined its sensors so they conform nicely with the vehicle’s body, Apple’s are perched on the vehicle’s roof like an ugly cargo carrier.”

Tim Cook has previously confirmed in an interview that Apple is currently “focusing on autonomous systems” rather than a car stamped with the Apple logo, which could be used for many different purposes.