With iOS 14 and macOS 11, Apple has made some changes to Safari, including support for HTTP/3, a faster web standard being adopted by major web browsers.

According to Apple, Safari 14 is available for iOS 14, iPadOS 14 and macOS 11, bringing support for Safari Web Extensions for Mac, automatic webpage translate (beta) and more. One noted change in release notes is the addition of HTTP/3.

HTTP/3 is the next version of the Hypertext Transfer Protocol and in “layman’s terms” can be described as:

HTTP/3 is the third version of the Hypertext Transfer Protocol (HTTP), previously known as HTTP-over-QUIC. QUIC (Quick UDP Internet Connections) was initially developed by Google and is the successor of HTTP/2. Companies such as Google and Facebook have already been  using QUIC to speed up the web.

As HTTP/3 becomes widely adopted, it should make the web become faster and more reliable.

For iOS 14 users, you can see the toggle for HTTP3 under Settings > Advanced > Experimental WebKit Features, as shared by Reddit user ‘Njwest’: 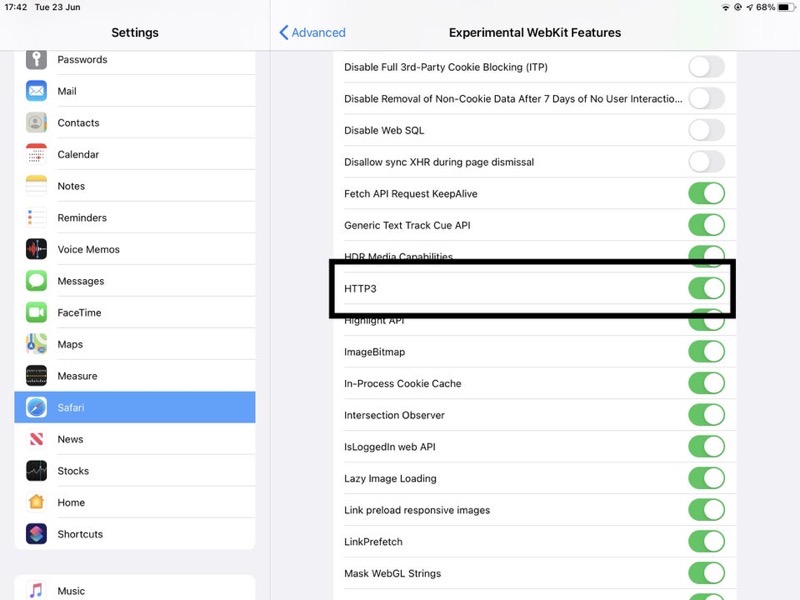 Apple added HTTP/3 to its Safari Technology Preview 104 back in April, but now we’re seeing it fully implemented in iOS 14 and macOS 11.

Safari in iOS 14 also has other performance updates, such as incremental loading of PDF files, faster tab closing and more.