Apple has updated its App Store distribution page to note 79% of devices are now running iOS 9, based on App Store usage as of March 7, 2015. When iOS 9 was released back in mid-September, it took just over three weeks for 57% of devices to update. 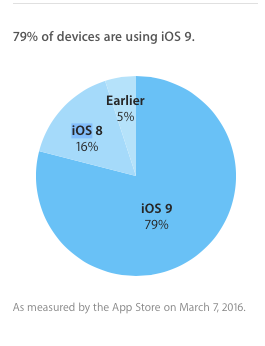 Shortly after the release of iOS 9, Apple said the update was already installed on 50% of devices, which took only three days to accomplish, making it the fastest software release in the company’s history.

iOS 9 contains features to allow future updates to be installed automatically while you’re asleep, plus the ability to temporarily delete and reinstall apps to make space for updates.