E-commerce trade publication Internet Retailer has ranked Apple has the second biggest behind Amazon, according to their 2013 data, reports the WSJ:

The iPhone maker notched a 24% increase in online sales to $18.3 billion last year. Part of the increase in Apple’s sales this year came from Internet Retailer’s inclusion of Apple’s online hardware sales for the first time, in addition to the digital sales from its App Store and iTunes.

As stated, the reason for the jump was the inclusion of Apple’s online hardware sales in tallying numbers, on top of digital sales within iTunes and the App Store. What allows these companies to make seamless sales are the millions of credit cards stored on file, allowing for quick purchases.

Check out the chart below: 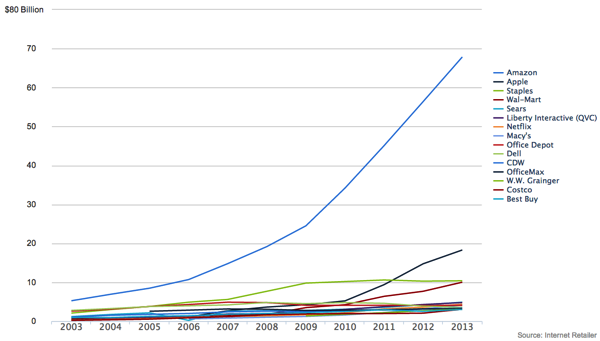 As you can see, Amazon is a giant, selling $67.8 billion worth of goods last year, much higher than any other company. But despite Amazon having the most revenue its margins are razor thin, compared to Apple, which makes the biggest profits on its sales.

Google appears to be working on a new web browser for iOS based on the tech giant's own Blink engine instead of Apple's WebKit, in violation of the App Store Review Guidelines — reports The Register. The in-development browser was referenced in a recent Chromium bug report, but Google says it won't actually release it....
Nehal Malik
50 mins ago