The past few years Apple has included Black Friday sales for Canada, such as last year which saw various store gift card promos with purchases. For 2014 however, that has changed as Apple has decided to only run their gift card promo in the U.S. only: 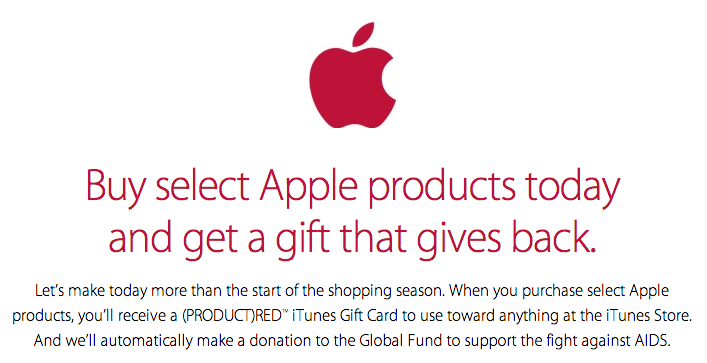 That means Canada, along with other major international markets such as the U.K., France and Australia missed out this year. While some suspected Apple was holding out till the last minute to announce Black Friday sales in non-U.S. locations, nothing materialized.

The Apple Canada website only shows its (RED) campaign for 2014 World AIDS Day, with no mention of any Black Friday discounts. Since Canada is excluded with everybody else, we don’t have to feel that bad (no crying in the fetal position today, okay?).

You can find a round up of Black Friday sales on iPhone, iPad and Mac from our earlier post here. What are you buying today?