Apple has revealed numerous new details of the construction and design plans for its new ‘Spaceship’ Campus 2 to Business Insider, which shed light on Tim Cook’s claims that the company’s new headquarters would be “the greenest building on the planet”. It seems that Apple has actually shaped its construction plans with an eye towards protecting the environment. 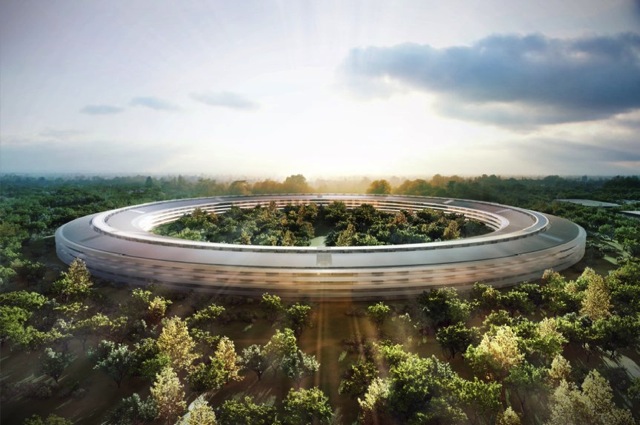 The report notes that it’s not just the building that will be sustainability stalwart, but also its construction plans. For instance, Cupertino law requires that construction sites reuse at least 75% of their demolished materials. Apple says it’s using over 90% of the old headquarters in building the new one. “Even the trees are being repurposed”. Apple says it’s working with a local mill to create lumber from the trees it has had to clear rather than mulching or just destroying them.

“Like any large building, Apple’s new HQ will require a substantial amount of concrete for its foundation. But rather than shipping off its concrete rubble, Apple has set up an onsite operating dedicated to recycling all of its old cement for the new building.

Once built, the new HQ will put other buildings to shame with its energy efficiency. Apple says the new building will use 30% less energy than a similar R&D office. What power the building does require will come from 100% renewable sources.”

Apple’s new HQ will also save money on heating and cooling, as the building will have natural ventilation for 75% of the year.